Less than a few weeks after officially ending his contract with the Basketball Federation of India (BFI), Spanish Coach Francisco Garcia is returning to the country, hired once again to lead India's Senior Women's Basketball team to the 2015 FIBA Asia Championship for Women, set to be held in Wuhan (China) from August 29 to September 5. Garcia, who helped India make history by finishing at a best-ever fifth place at the 2013 FIBA Women's ABC, will be heading straight to Bengaluru to oversee the national basketball camp and prepare the team for the upcoming championship this year.

"I'm really happy," Garcia told me when he confirmed his decision to return to India, "I wasn't prepared for this. But when [the BFI] contacted me again, I was excited to come back. I had other offers, but I wanted most to come back to India for the upcoming tournament."

Garcia is waiting for his visa process to clear up and expects to be in India sometime early next week. The Spaniard was initially hired by the BFI two years ago to helm India's Senior Women's team. He enjoyed a relatively successful two year stretch, famously helping India finish at a best-ever fifth-place at the 2013 FIBA Asia Championship and helping a younger side to a bronze medal at the 2014 Lusofonia Games. Later in 2014, Garcia also coached the team to a 6th place finish at the Asian Games in Incheon. He has been active in taking his knowledge to the grassroots level, coaching players and other coaches at various events around the country over the last few years. Before coming to India, Garcia had 20 years of coaching experience in Spain, Denmark, and Finland.

Because of political infighting between warring factions of the BFI, a lot of contractual obligations and relationships within Indian basketball suffered a strain or were put on gold. Part of the ramifications of this was that the contracts of India's foreign coaches - including Garcia and Strength and Conditioning coach Tommy Heffelfinger - weren't renewed at the end of May. The BFI dust cleared up a little bit as the faction led by K Govindraj eventually gained a legal stronghold over BFI operations. 'Team Govindraj' made it a priority to then bring Garcia back into the fold.

Bringing Garcia back saves the BFI from the headache of finding a new head coach at the last hour, and the headache for the new coach to implement a whole new system before India's biggest international challenge. "I think most of the girls were very happy about the news, and I heard many of them were pushing for me to return!" Garcia said, "It would have been tough for a new coach to understand the culture and system in time for the FIBA ABC."

25 of India's best available women players are being invited for the national coaching camp at the Sri Kantaveera Stadium in Bengaluru. Garcia will have enough time to reacquaint himself with the top players and cut down the probables list to 15 after the first week of camp, and then to the final 12 for the last few weeks before the team heads out to Wuhan. 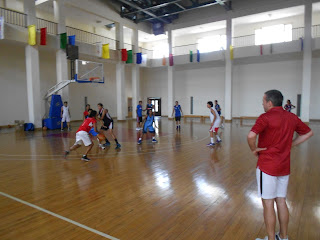 Arjuna Award winner Geethu Anna Jose, who has been India's best player for more than a decade, will not be a part of the probables for this tournament, as she is taking time off of the game after the birth of her first child. However, Garcia is looking forward to welcome back India's star forward Anitha Paul Durai back to the lineup and is also hoping that Maharashtra's Shireen Limaye is back to full health and ready to contribute to the team.

"Missing Geethu is our most important gap from the team we had in recent years," Garcia said, "But most of the other players should be back. Anitha is back. And we'll test Shireen Limaye's knee. Anitha and Shireen are two of the most important players. They play the most minutes for me and should make us much stronger if they are conditioned and in shape."

Garcia, who has lamented in the past about India's lack of preparation games before huge tournaments such as this one, is hoping that an exposure trip works out this year before the FIBA ABC's begin. According to him, the team is making tentative plans to play in South China at the NBA Academy or with other Chinese professional clubs before the tournament begins. "I hope it is not the same experience as last time," he said, conjuring the memory of showing up at the Asian Games in Incheon last year with no practice matches before India's first game at the tournament.

India will be in Level 1 of the FIBA Women's ABC this year again, after Garcia led the team to their first-ever Level 1 win against Kazakhstan at the 2013 FIBA Women's ABC in Bangkok. India then defeated Malaysia in the Level 1 qualifying game and finished at best-ever fifth place at the tournament. In 2015, the Level 1 teams that India will face will include the 'Big Four' of Asian Women's basketball: Reigning champs Japan, hosts China, Asian Games champs South Korea, and Chinese Taipei. India and Thailand will round up the six team group. India will have to finish in the top four for the first time in history to have a shot at the semi-final stage. To stay in Level 1, they will have to make sure to defeat the Level 1 qualifying round matchup against the top or second seeded teams from Level 2. 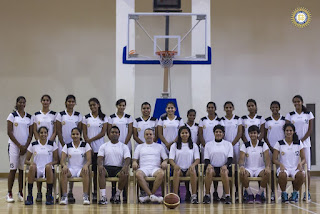 The coach remains cautious of the team's chances. "It's tough," Garcia said, "This is not the same team as it was two years ago, when we had Geethu. Now we have a different group. I think we can beat Thailand, but the top four teams are on another basketball galaxy! Even to keep the Level 1 spot this year will be very tough. Lebanon is back after their ban two years ago, and we are likely to face them or Kazakhstan - both tough teams - in the qualifying round games. We will fight to the end."

The challenge now will be to help this team perform to its very best without the centerpiece - Geethu Anna Jose - in the middle.

"I hope that Anitha can be a our veteran player and the coach on the court for this team," Garcia said on coping without Geethu, "I am also hoping for a big step forward from the likes of Jeena PS, Kavita Akula, and Shireen, if she's healthy. I think all our young players have to take a step forward." 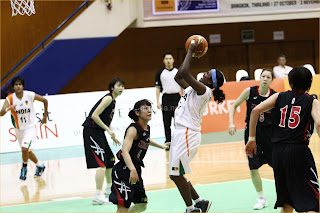 While he now focuses all his attentions to the camp in Bengaluru and the tournament in Wuhan, Garcia's future with Indian basketball after the FIBA Women's ABC remains unclear. "I have options in Spain and some other countries, but I don't know yet," he said, "I don't know if I will stay in India after this. I'll go day by day to see what happens and discuss it when the time is right."

"I India, we have a very attractive opportunity," Garcia added, "Especially for me, because I like to work with youth women players and help them to their highest level. Basketball in India is a good place for that."

Welcome back, Coach. Hopefully the short break in the relationship between Garcia, the federation, and the players wasn't too severe so that regular basketball operations can return to smooth running as soon as possible. The main task ahead is a good performance at the FIBA Asia Championship. Garcia may not have his usual best player this time around, but he will have a chance to oversee the development of a lot of exciting young talents. Two years ago, he helped India make history at the FIBA ABC; can the comeback coach do one better this time around?