The most eye-catching thing about the 2015 UBA Basketball League - the first iteration of a two-week national professional basketball league in India - are the team names. Nothing makes basketball fans giddier than seeing their home teams - or other teams in their country - represented like professional franchises, with nicknames, logos, attractive jerseys, banners on the rafters, and more. As the first day of this novel league tipped off at the Gachibowli Indoor Stadium in Hyderabad on Friday, July 17, it was this fanfare and the celebrity attendance that started the show. But ultimately, the show was stolen by the main event: the exciting basketball players in attendance providing high-quality hoops action for the fans on court.

On the first day of this league, which features eight teams from around the country, hosts Hyderabad Sky and the Pune Peshwas got off to winning ways.

The Universal Basketball Alliance - UBA India - have launched this league to be held in Hyderabad from July 17 to July 30, set to be held on a league-cum-knockout basis. The eight participating franchises are: Pune Peshwas, Delhi Capitals, Haryana Gold, Punjab Steelers, Chennai Slam, Mumbai Challengers, Bengaluru Beast, and Hyderabad Sky.

“This is the first time in India’s basketball history that a pro league is being organised,” said UBA India Director Deepesh Solanki. “Our main focus is infrastructure. Athletes should feel like pros.” Hindi Film actor Anjana Sukhani was the celebrity guest on the opening day and she wished both all participating teams the very best. “I’m so happy that someone has taken the initiative to bring out the talent that this country has.” she said. 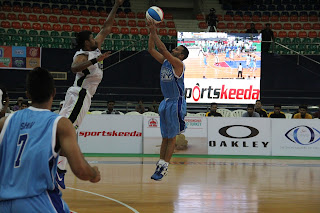 In the league's opening game, Pune survived a strong effort from the Bengaluru Beast and their star point-guard, TJ Sahi. Sahi - a former national team star - is the most recognizable name in this league and scored a game-high 32 points in his debut for the Beast. But it was Pune's forward duo of P Vijay and Arjun Mehta who scored 23 points each to stay competitive against the stacked Bengaluru squad and stretch the lead out to double digits in the third quarter. A last gasp effort from Bengaluru wasn't enough and Pune earned a surprising victory, 88-81. Bengaluru's Chetan Suresh scored 16 in the loss.

Hosts Hyderabad won in a thrilling opening encounter against the Chennai Slam. At one point, Hyderabad looked comfortable and fully in control of proceedings, leading 36-22 at halftime and giving the home fans a lot to cheer about. But Chennai grabbed momentum in the second half and made a furious comeback. Unfortunately, they fell short, and when time expired, Hyderabad survived to win 65-61. Nihal Yadav (19) and Sujith Reddy (16) were Hyderabad's high scorers in the win.

Scoreboard
Find the full schedule of the league on UBA India's website.
Posted by KARAN MADHOK at 19:12