History is made to be changed and records are set to be broken, and no matter how many years may pass by, the history-altering moment can still creep up and surprise us. 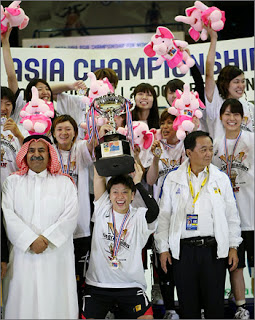 After a 43-year gold drought, Japan finally returned to the top in Asia after defeating Korea on Sunday in the Final of the 25th FIBA Asia Championship for Women, held in Bangkok (Thailand) from October 27 - September 3. The last time Japan won gold was back in 1970, in Kuala Lumpur, which was the same year that India made their debut in the tournament. In 2013 - 43 years after that debut and in their 16th time participating in the competition - Indian Women also made history by securing their first-ever Level I victory and finished at fifth place, their best seeding ever.

In the Final, Japan came motivated to dominate from the very first whistle, and played impressive defense to take a 21 point lead over Korea by halftime. They cruised in the second period en route to a comfortable 65-43 victory. Center Ramu Tokashiki - named MVP of the tournament - led Japan with 20 points and 18 rebounds in a dominating performance. Yuka Mamiya doubled up Japan's twin towers in the inside, adding 19 and 9.

China, who missed the Finals for the first time since 2001, and had been the winners of the last two times this tournament was played, had to settle for the Bronze medal, as they defeated Chinese Taipei 61-53 earlier in the day. Song Gao led China with 22 points. 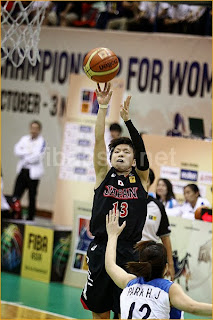 China were edged in the semi-final stage in a close contest by Korea, who were led by Yeon Ha Beon (22) in the 71-66 win. Nan Chen had 23 points for China. In the second semi-final, Japan cruised by Chinese Taipei to win 74-56, with Tokashiki again leading with 17 points. Tsai Pei-Chen led Chinese Taipei with 19.

For India, it was the first chance for newly-appointed Spanish coach Francisco Garcia to lead the team into a major tournament. India were placed in Level 1 of the Preliminary Round after finishing sixth back in 2011, and they were set to face the powerhouses of Asian hoops: China, Japan, Korea, and Chinese Taipei, as well as Kazakhstan. After spending years as India's finest player in the Women's division on the international level, Geethu Anna Jose hinted that this might be her last international outing.

India started off the tournament against Chinese Taipei, who got off to a hot start and never looked back. Led by Yi-Ting Wu (18), Chinese Taipei cruised to a blowout victory, 85-57. Jose struggled from the field in the face of tough defense, and India's offensive load was carried by her Railways' teammate, Anitha Paul Durai (22). 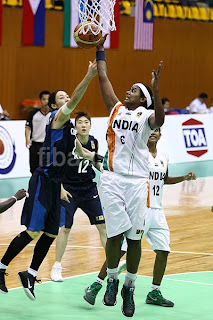 Korea faced India in the next game, in what turned out to be India's worst defensive performance of the competition. Led by Danbi Kim (25) and Hui Lim (16), Korea scored 109 points to India's 62. Jose improved after the first game and scored 17 for India.

China defeated India in their third game, holding India to their lowest scoring output, 97-36. Yanyan Ji had 16 for the winning side.

India's fifth Preliminary Round game turned out to be the most crucial one, against Kazakhstan. Garcia's Indian squad came out determined to end their level one drought, and took an 11 point lead over the Kazakhs at the end of the first half. But a big third quarter surge brought Kazakhstan all the way back to tie the game. A defensive, back-and-forth final period saw the two team tied at 55 as regulation ended. Led by Paul Durai's 18 points, India took charge of overtime to emerge as 65-62 victors. If was India's first-ever win in Level 1. Oxana Ivanova of Kazakhstan scored 16 to lead her side. 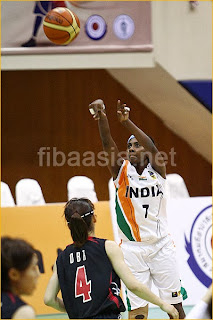 India's last game of the championship was a Level 1 qualifying match against Malaysia, who finished at second place in Level 2. India needed a win to ensure that they would be returning to Level 1 in the championship in 2015. Young starlet Jeena PS scored 24 points and Jose added 21 as India controlled the game from the first period and stayed in command en route to a 74-59 win.

Thus, India's 2013 FIBA Asia campaign ended with a 2-4 record and a fifth place finish. Despite struggling relative to her usual high standards, Jose led the team in scoring (12.8 ppg) and rebounds (7 rpg). Paul Durai played well for India too, and youngster Jeena provided some hope for big performances in the future.

Jose might not be part of the team by the time the next tournament rolls along, but she can hold her head up high to potentially end her international career on a positive note, helping her team make history in Bangkok. While the top four in Asia has been generally the same combination of China-Japan-Korea-Chinese Taipei, the fifth place is up for grabs, and it's up to the future Indian squads to ensure that they don't fall below the spot again. India can even start looking ahead and dream of perhaps breaking into the top four soon, although no outside team has dethroned the big four in 29 years! 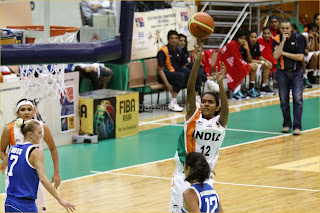