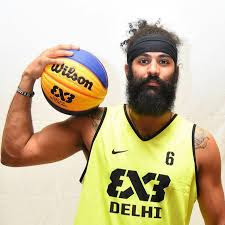 In Episode 92, Indo-Canadian baller Bikramjit Gill joins Hoopdarshan from Toronto, where he talks to co-hosts Kaushik Lakshman and Karan Madhok about staying fit in lockdown, the journey that made him a 3x3 phenom in India, the state of Indian basketball, how the nickname '6earded King' came about, and much more!

Gill, who lives between Toronto and New Delhi, has played for the Ball State University in Indiana, Japan's JBA B-League, and was the MVP of the 3x3.EXE Premier League. He has represented Canada at the 3x3 World Cup. For the last few years, he has been part of the 3BL in India.

Posted by KARAN MADHOK at 00:34 No comments: