Indian basketball struggles to rise in FIBA Rankings in 2017


This article was first published in my 'Hoopistani' column for The Times of India Sports on December 10, 2017. Click here to read the original piece.

Often, no amount of statistical logic can dampen the pure jubilation of success. In July this year, in front of a packed stadium of cheering home fans at the Sri Kantaveera Stadium in Bengaluru, India’s multi-talented forward Shireen Limaye took a fearless three-point shot at the buzzer. The occasion was the Division B final of the FIBA Asia Cup for Women, the biggest basketball tournament in the continent. The opponent was Kazakhstan. The scores were tied.

Limaye made the shot. The crowd went wild. The rest of the team celebrated wildly mid-court. India won the final, and the victory assured them promotion to Division A.

It was one of the most memorable shots in recent Indian history, capping off India’s incredible 5-0 record at the tournament. 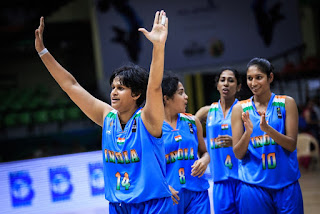 And yet, because the victory came against other lower division squads, it barely registered India’s rankings in relation to the rest of the basketball world. In fact, India’s rankings fell five spots in the year-end FIBA World Women’s Rankings. The main event of the FIBA Asia Cup for Women wasn’t India’s Division B victory, but Japan securing a three-peat at the championship in the thrilling Division A final over Australia.

FIBA calculates their rankings based on performances in top official FIBA competitions and their qualifiers, with points based on home and away games, strength of opposition, recency, region, rounds, and more.

Although India’s senior and youth women squads performed well in the lower divisions of their respective championships, their victories did not have a big effect on the final rankings of the year because of the strength of their opposition and the rounds they played in. India’s senior men’s team played in their own FIBA Asia Cup and World Cup qualifiers but performed poorly and failed to make gains in their rankings, too.

India’s Senior Women’s team played in the FIBA Asia Cup for Women in Bengaluru, winning Division B after a 5-0 record. The team was coached by Serbian Zoran Visic and captained by veteran Anitha Paul Durai, who ended up as India’s top scorer at the tournament. 22-year-old Grima Merlin Varghese was the surprise package for the squad and should now feel confident of playing a major role in the team in the future, too. Raspreet Sidhu, Kavita Akula, Jeena Scaria, and Rajapriyadarshani Rajaganapathi, and Shireen Limaye were all part of India's main rotation throughout the tournament. The team’s ranking fell five spots, 40 to 45.

The senior Men’s team played poorly in their corresponding tournament: the FIBA Asia Cup for Men in Lebanon in August. Even the coaching of NBA veteran American coach Phil Weber didn’t help to propel the team to better results. India finished the tournament 0-3 in the preliminary round and didn't qualify for a chance at the knockout stage. Amjyot Singh led the team in scoring (13.0 ppg) and assists (4.3 apg) and was one of the squad's few bright sparks. Amritpal Singh had the team's best efficiency rating and led them in rebounds (8.7 rpg). Arvind Annadurai did a good job in his role while 17-year-old point guard Baladhaneshwar Poiyamozhi showed potential that he could rise to be an answer for the team in the PG position in the future.

At the FIBA World Cup 2019 Qualifiers, India’s Men began Group C with two uninspiring losses to Lebanon (away) and Syria (home). India were coached by Visic in these games, but the short-handed team failed to deliver. Their only bright spark was Satnam Singh - averaging 11.5 points and 8.0 rebounds per game - but even he was expected to be much more dominant with the opportunity to start for the national team. India’s Men’s rankings stayed static at 64.

Visic oversaw some happier times with the Women’s youth squad in Bengaluru’s FIBA U16 Asia Cup for Women. Like the senior women’s team, India dominated Division B of the competition, winning all five of their games in comfortable fashion and securing a qualification to Division A in front of their home fans. The biggest star to emerge for India from this championship was Uttar Pradesh girl Vaishnavi Yadav, who finished the tournament as Division B's leader in points (20.4 ppg) and joint leader, with another Indian Neha Karwa, in assists (6.2). Yadav was also India's second-best player on the boards, grabbing 8.8 rebounds per contest. The team's captain Pushpa Senthil Kumar was also a major force in the post, finishing as the division's second-best rebounder (13.2 rpg). Karwa was a steady presence for India all tournament, too, and could be a guard to watch for the future. The team’s efforts helped India rise one spot to 37 in the Girls’ rankings.

The 2017 FIBA U16 Asia Championship for Men, originally slated to be held in Malaysia, wasn’t held this year. Despite being out of action, the performances drop of teams in other regions actually helped India rise in the Boys’ rankings six spots to 46.

USA continued to dominate world basketball, ranking at No. 1 in the Men, Women, Boys, and Girls standings. This was the first year that Oceania teams were incorporated in Asia, and Australia became the top-ranked teams in both the Asian Men and Women’s divisions. China led the rankings for Asian Boys and Girls.

Posted by KARAN MADHOK at 20:27 No comments: Links to this post 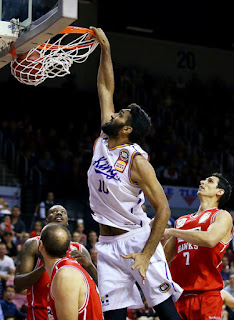 In Episode 56, Kaushik and Karan also discuss India's performances at the FIBA World Cup Qualifiers, the 'Hoopdarshan Derby' (Knicks vs. Lakers), and much more!

Posted by KARAN MADHOK at 08:41 No comments: Links to this post


The Basketball Federation of India (BFI) announced on Thursday that its president, K. Govindraj, has been elected as the Vice-President of the Indian Olympic Association (IOA). It's been a celebratory few weeks for Govindraj, who was also appointed as a member of the FIBA (International Basketball Federation) Competitions Commission recently. 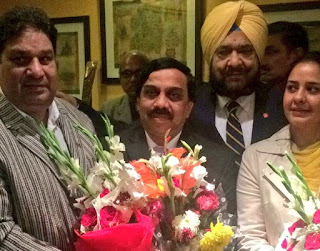 Election results of the IOA were announced in New Delhi on Thursday, December 14, and president of the Indian Hockey Federation (FIH) Narinder Batra was elected as IOA president. The IOA's Annual Generation Meeting also witnessed elections for the eight posts of vice-president, six joint secretaries, a lone treasurer and 10 Executive Council members.

Govindraj, who also held the position of secretary of the Karnataka State Basketball Association (KSBBA), became president of the BFI in March 2015 and secured the position after a lengthy feud with a competing executive committee. His main accomplishment over the past year has been hosting three international basketball events in India: the FIBA Asia Women's Cup in July 2017, FIBA U16 Women's Asian Championship in October 2017 and FIBA 2019 World Cup Asian Qualifiers in November 2017.
Posted by KARAN MADHOK at 21:35 No comments: Links to this post

Reliance Foundation Jr. NBA programme in India for 2017-18 to engage more than 45 lakh youth in India


The NBA on Thursday, December 7 announced the return of The Reliance Foundation Jr. NBA programme, a comprehensive youth basketball initiative that applies the values of basketball to positively impact the lives of Indian boys and girls, for its fifth consecutive year. Returning to India for the 2017-18 season, the expanded programme will through March 2018 and expect to engage more than 45 lakh youth and 4,500 physical education instructors and coaches in 34 cities nationwide.

The programme – the largest in its five-year history – will focus on inspiring youth to adopt a healthy, active lifestyle by integrating basketball into the physical education curriculum of the participating schools. 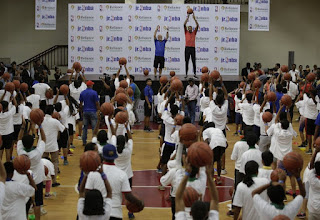 "We are thrilled to enhance the presence of basketball in more cities and develop life skills amongst youth through our partnership with the NBA," said a Reliance Foundation spokesperson. "The Reliance Foundation Jr. NBA programme is in line with our goal of enabling children to develop holistically through sports."

"Between the launch of The NBA Academy India, the opening of NBA Basketball Schools in Mumbai and Delhi, and our largest Jr. NBA programme in the country to date, we are more focused than ever on growing basketball among young Indian boys and girls at all levels," said NBA India Vice President & Managing Director Yannick Colaco. "The Reliance Foundation shares our commitment to holistic development through sports and teaching the values of the game, including teamwork, leadership and respect."

The programme, which remains free for all participants, includes individual skills competitions; a timed circuit-based challenge incorporating dribbling, passing and shooting; and 5-on-5 competitions. The top performers from each in-school skills competition will qualify to attend the citywide skills challenge, and the finalists from each citywide skills challenge will compete at the City Finals in 2018. The Jr. NBA Coaches Academy will train local coaches from partner schools.

During the 2016-17 season, Jr. NBA reached more than 1.8 crore youth in 53 countries through its youth participation initiatives.

Since its launch in 2013, The Reliance Foundation Jr. NBA programme has reached more than sixty lakh youth and trained more than 5,000 physical education instructors nationwide. The programme is part of the NBA’s existing basketball and youth development initiatives in India. Students, parents, coaches and teachers can visit rf.jrnba.com, the official destination of The Reliance Foundation Jr. NBA program, to learn more. 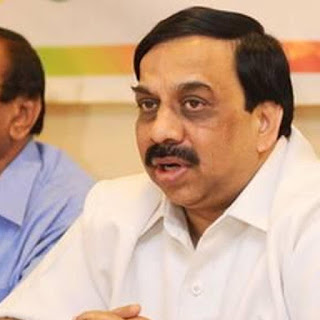 "I’m humbled by the honour of being bestowed this position," said Govindraj. "This is not just an achievement for myself but for all the BFI who have worked tirelessly for the last three years to showcase the true potential of Indian Basketball."

Govindraj, who also held the position of secretary of the Karnataka State Basketball Association (KSBBA), became president of the BFI in March 2015 and secured the position after a lengthy feud with a competing executive committee. Govindraj's main accomplishment over the past year has been hosting three international basketball events in India: the FIBA Asia Women's Cup in July 2017, FIBA U16 Women's Asian Championship in October 2017 and FIBA 2019 World Cup Asian Qualifiers in November 2017.