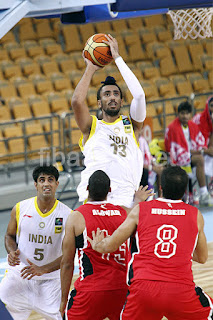 One of India's most talented basketball players, 22-year-old Chandigarh boy Amjyot Singh's skills made him a regular starter for India's national team, gave him a pivotal role in India's historic win over China last year, and brought him a pro contract to play in Japan. In Episode 13 of Hoopdarshan - the first podcast on Indian Basketball - Amjyot joins hosts Kaushik Lakshman and Karan Madhok in a candid conversation about his starring role for Team India, his experiences playing in Japan, facing FIBA's 'No Headgear' policy as a Sikh player, and listening to romantic slow jams before big games.

First promoted to India's Senior Men's team in 2011, 6-foot-9 Amjyot has played a huge role for India at every major international tournament since, including the 2011 and 2013 FIBA Asia Championships, the 2012 Stankovic Cup (where he was captain), and the 2014 FIBA Asia Cup. Amjyot became one of two first Indian male players to play pro internationally, when he and Amrit Pal Singh joined Hyogo Impulse of Japan's BJ Summer League. Back home in India, he plays for IOB in Chennai. He was named one of the 2015 FIBA Asia Championship players to watch by FIBA, and he spoke to us on the podcast about his growing role for India, his ambitions to become one of the best in Asia, and going head-to-head with India's NBA draftee, Satnam Singh.