Large crowds of fans cheered on from the bleachers. Bollywood and TV celebrities watched from the sideline. And on the court, talented basketball players provided a unique stage never been set in India before. 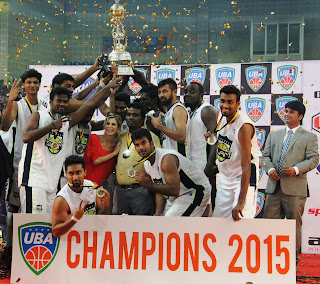 And after two weeks of basketball featuring players and teams from all over the nation, the final turned out to be a triumphant day for the Chennai Slam, who brushed aside the Pune Peshwas to be crowned champions of the 2015 UBA Basketball League at the Gachibowli Stadium in Hyderabad on Thursday, July 30.

The Universal Basketball Alliance - UBA India - brought together eight teams from around India for two weeks of this unique initiative, a short professional basketball league in a country that has never had an official pro league before. Tipped off on July 17, the participating teams came from Chennai, Pune, Punjab, Mumbai, New Delhi, Bengaluru, Haryana, and the hosts Hyderabad to play in a round-robin fashion league before the knockout semi-final/final stage in the last two days.

Although Chennai and Pune had split their league games 1-1, the final was a completely one-sided affair. Chennai were precise and perfect, the exact opposite of some careless and nervous play displayed by their opponents, to take a 14-point lead at halftime and extended it 20 soon after to turn the game into a blowout early. When the dust settled, Chennai had won 81-49 and lifted the first-ever title at the inaugural league. The Slam's trio of the Nigerian Chukwunanu Agu (22), Bernette Carmel Joseph (21), and Ramkumar (19) did most of the scoring damage for the victors. 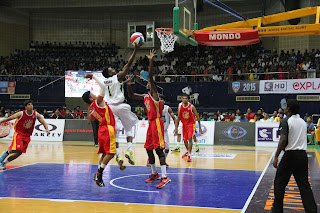 The MVP of the tournament was Punjab Steelers forward Ravi Bhardwaj, who put up consistent numbers throughout the tournament. He won a Hyosung GTR superbike along with the MVP trophy. 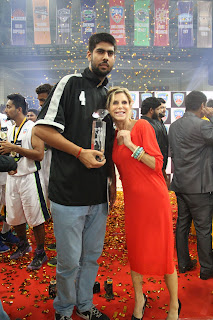 Chennai's final triumph was in the making as they revved up and gained momentum the further they went into the tournament. At the semi-final stage just a day earlier, they unleashed a scoring barrage on the Punjab Steelers to win 92-77. Despite being down by four in the first quarter, Chennai bounced back to take the lead before halftime and stuck to it till the game concluded. Vignesh Prabhu (24) and Ramkumar (19) were the top scorers for Chennai while Sartaj Sandhu (28) and Ravi Bhardwaj (20) did the scoring damage in a losing effort for Punjab. The second semi-final was a thriller between the Pune Peshwas and the Haryana Gold which came down to the last shot, a go-ahead three by Karna Mehta with eight seconds left that gave Pune an 81-80 victory and a ticket to the final. The game was neck-to-neck until the final play and provided a thrilling shootout between Ajinkya Mane (26) of Pune and Vikas Mor (27) of Haryana.

The above players will be awarded 1-year professional playing contracts worth $100,000 for the next season of the league. Each individual player contract shall be worth $5,000, out of which $4,000 will be the player’s salary and the remaining will cover the expenses on gear and other training equipment. The didn't feature any of the most-recognizable or top talents in India, the players who more likely to be seen in the Senior National championships or donning the India jersey in international games.

This is still a league in its early stage, and most of the players who have been given an opportunity here have likely graduated up from the University league held by UBA India earlier. Still, it was a fun event and showcased that India has a lot more basketball to offer than the 'official' events governed by the Basketball Federation of India (BFI).
Posted by KARAN MADHOK at 21:45