When Thrissur District's veterans' basketball team needs a strong body off the bench to contribute for a few minutes off the bench, grab some rebounds, notch up some hustle points, and give the starters a rest, they turn to IM Vijayan. The 46-year-old is by no means a star on this team, but he did enough to earn himself a spot on the team which eventually went on to win the All Kerala Veterans' Basketball Tournament in Kottayam last week.

The star of the victory was Sunny Thomas, who scored 32 points for Thrissur's final triumph over Vijayan. And yet, in many ways, it was this bit-playing bench-warmer - Vijayan - who stole the show. Of course, that was always bound to happen, for Vijayan was a basketball bench-warmer like none other. 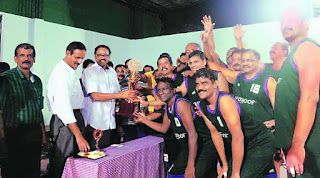 In a different life, in a different time, Inivalappil Mani Vijayan is a superstar, a legend. He has played 79 senior international games for India and scored 40 goals, starring as one of the team's most exciting and dangerous strikers for 14 years. He has been crowned Indian Player of the Year in 1993, 1997 and 1999, the first player to win the award multiple times, and was also awarded the prestigious Arjuna award in 2003.

And he did all of that for Indian football.

A decade after his retirement from competitive football, Vijayan's athletic motivation has gone nowhere, and now, he finds himself dabbling with another spectacular team sport: basketball. Vijayan joined his hometown team Thrissur, who still have talented veterans competing at a high level in their own championships in the state. The Indian Express' Rajeeb Mukherjee caught up with Vijayan after the tournament in Kerala to ask him about his love for basketball. Excerpts below:

Via The Indian Express

“I started playing basketball when I joined Kerala Police in 1986. I would also play a bit of volleyball. But then football took over and I forgot everything,” Vijayan said.
Ever since returning to the Kerala Police force a few years back, Vijayan has rekindled his affair with basketball.

“For the last couple of years he has been training with us every Saturday-Sunday morning at the indoor stadium,” said former India basketball player and Customs coach Sunny Thomas... “Vijayan was a great football player but he could have excelled in other sports as well if he tried,” Thomas said.
“As far his basketball skills are concerned, he may not be outstanding, but he is good.” Vijayan didn’t score any points for his team but would provide vital support during the entire tournament. He would come in as a substitute and help pick up the rebounds, Thomas explained.
“That’s because of my height,” Vijayan would say. Not one to gloat over his achievements, the three-time AIFF Player of the Year revealed that he also plays basketball during the inter-battalion tournaments of Kerala Police. Ask him about whether, during his days as a football player, he had ever dreamt of switching over to basketball, and pat comes the reply. “Never. Football was my first love, how could I ever think of dumping it.”


Great to see a legend from one sport try and his hand and find some small spurts of success in another. Indian football fans will be thankful that Vijayan didn't switch over to basketball earlier, as he proved to be one of the greatest that the nation has ever seen with the ball on his feet, not on his hands. But we can only wonder how his skills would've translated had he focused more on basketball earlier in his career: could he have become a national team star for the Young Cagers, too?
Posted by KARAN MADHOK at 21:09