The NBA is a league of giants and superhumans, where individuals who are blessed with a blend of athleticism and basketball talent push each other to the absolute limit. But even this tough, competitive atmosphere leaves room for anomalies, for exceptions that prove that sometimes motivation and will can be as much of a factor as size or finesse. It is this message that the NBA wants to convey to a world of basketball fans because there is hope for that NBA dream for all, no matter the size or opportunity. With the right combination of hard work and confidence, even an underdog can perform miracles.

And the NBA has had to bigger underdog than the smallest guy on court. Tyrone 'Muggsy' Bogues, who at 5'3" still holds the record for being the shortest player ever in the league, nevertheless played fourteen productive seasons for 14 years which included a memorable stint with the Charlotte Hornets before retiring in 2001. 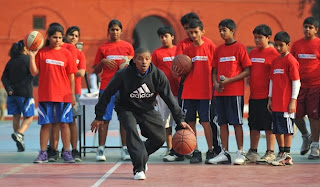 Now, Bogues will bring that motivation and inspiration that helped him excel in his own career to a host of young basketball aspirants in India. Bogues is set to visit India next week - his second visit in three years - stopping by Mumbai and Kochi to help out with the Reliance Foundation Jr. NBA programme. NBA India has announced that he will be working with several young Indian players as well as coaches and will help to promote basketball participation and a healthy, active lifestyle.

The Reliance Foundation and NBA announced a multiyear partnership to launch a comprehensive school-based youth basketball strategy for India: the Reliance Foundation Jr. NBA programme, which aims to teach basketball to more than 100,000 youth and train 300 coaches and physical education instructors to implement a turnkey NBA curriculum in India. Over the course of the long-term partnership, the goal is to reach one million youth and train 2,000 coaches and physical education instructors across the country! The first year of the programme is operating in more than 150 schools across Mumbai and Kochi.

This will be Bogues' second trip to India. He visited the country back in January 2012. His last visit was to New Delhi where he took part in an NBA India and Senate India Caucus Basketball Event at the Modern School in Barakhamba. Bogues interacted with around 75 local schoolkids and was welcomed by five visiting members of the American congressional delegation.

I wrote about Bogues' clinic in New Delhi and also interviewed the former NBA point guard about dominating in a big player's league and the message that he would like convey to young Indians. Here are some excerpts from that interview:

Hoopistani: It seems that the NBA is keen to abolish the notion that one needs to be tall to be a basketball star. 6 foot 1 Brandon Jennings was here preaching the same purpose last year. Is that the message that you are bringing here with you as well?

MB: Yes, that that is exactly the message that I want to spread here in India. Height isn't everything. When I was growing up, many people told me that I would never make it. But I felt like I had the potential to play well. I developed a lot of confidence in myself over the years and I was able to show that even someone at five foot three inches could play basketball - which is known as a 'tall man's game' - at the highest level, the NBA. Without that confidence and self-belief, players like me or Brandon Jennings would've never made it.

Hoopistani: At the grassroots level in India, a lot of players are still scouted based on their height first and talent second. Was this also the case in the US when you were younger?

MB: Yes, it was very similar, to an extent. People thought that in basketball, height equaled talent, and there were few opportunities for smaller players. But I always believed that the game is for whoever has the skills to play, not just for six or seven footers! I want to pass on that same belief to Indians who are still at an early age. 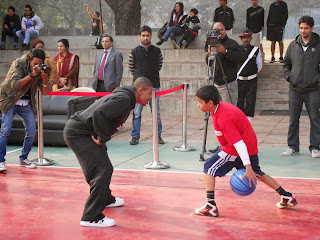 Hoopistani: Was it a struggle for yourself - as a shorter player - to have coaches and scouts recognise you for your natural talent and hand you opportunities?

MB: Yes, I had to change the mindset of a lot of coaches when I was young who believed that height was the only important thing. I competed and played well against those bigger than me to change the perceptions. But what helped me is that I understood my point guard position and absorbed all the knowledge I could relating to that position. I had to play to my strengths, which were dribbling and passing the ball. A lot of smaller players who are point guards think that they have to score a lot to be effective and sometimes, this can hurt them. That's why a point guard has to know when to score and when to get his teammates involved.


See more of the interview here.

Indian players, even the most athletically talented or tall ones, are underdogs too, because they don't have the access to the training, facilities, coaching, or competitive basketball opportunities in India that young players from the USA or some other countries may have. Hopefully Muggsy can motivate this generation of hoop dreamers to keep fighting to be the best they can despite this.