India started their 2014 international basketball calendar in spectacular fashion, as the Senior Men's National team defeated Angola in a thrilling contest at the Final of the 3rd Lusofonia Games Basketball Tournament, held at the Goa University Complex in Taleigao, Goa on January 27th. The win capped a successful, undefeated run for the Indian team who defended their home turf in style to defeat the favoured African champions. India's Women's team - comprising mostly of under-21 players - finished with a bronze medal. Mozambique won Women's gold. 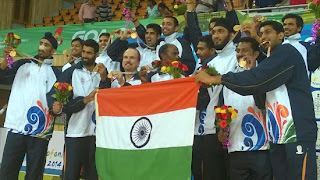 The Lusofonia Games are organized by the ACOLOP (Associação dos Comités Olímpicos de Língua Oficial Portuguesa). Because of Goa's historical Portuguese influence, India is an associate member of the Lusophone (Portuguese-speaking countries) and participated in these games. 12 countries from four continents are taking part in nine different sports this year. The basketball tournament at the Games was held from January 23-27, featuring six teams in the Men's division and four for the Women. India entered the competition officially under the 'Goa-India' banner with Lusofonia rules requiring that a certain percentage of India's national team comprise of players from the state of Goa

Led by Head Coach Scott Flemming, India came into the Finals undefeated in the tournament and after already sneaking past Angola once in the group stage. Angola - ranked 15th in the FIBA World Rankings - are Africa's most successful basketball team and most recent FIBA Africa Champions. They sent a mostly Under-23 side for the Lusofonia Games, but India's performances was nevertheless extremely impressive. India are ranked down at 61 in the FIBA rankings and fielded a tweaked senior squad featuring a couple of Goa players to fulfill the tournament's criteria.

Both teams started slow on the offensive end in the Men's Final, and India - playing without veteran point guard Sambhaji Kadam was missed the finale to injury - held on to a slim four point lead at halftime. Angola came storming back in the third quarter to outscore India by 23-16 and take a three-point advantage going into the fourth. The final period, played in front of a large cheering crowd, saw India make a heroic comeback to take the lead and then hold to deliver a 77-70 victory. For a squad marred with a history of late-game nervousness, it was a remarkable, clutch performance. Guard Joginder Singh led India with 18 points while captain Vishesh Bhriguvanshi added 17, including a last minute dagger three. Angola's star Edson Mdoniema was the leading scorer with 23 for the silver-medalists.

Earlier in the day, another strong African side Mozambique defeated Cape Verde 56-37 to win the Men's Bronze Medal.

India were placed in Group B for the Men's Preliminary Round along with Guinea Bissau and Angola. India started off the tournament with confidence as they blazed past Guinea Bissau in the first game, displaying incredible defensive intensity to hold their opponents to just 18 points in the first half and cruising to a 82-48 win.

India played Angola next, and continued their form to take a 15 point lead early in the game and an 18-point advantage at halftime. Angola began to chip away at the lead after the halftime break, and came within a single possession to India in the game's last minutes. Fortunately, India were able to hold on to their nerves and end with a 78-75 victory. Vishesh Bhriguvanshi scored a game high 23 points. Angola's leading scorers were the duo of Santos Hermeniecnldo (17) and Lucas Edmir (16).

The semi-finals were next, held on Republic Day in India, against Cape Verde. It was a see-saw battle as the two teams exchanged several leads and were tied at 43 by the end of the third quarter. India finally found their shooting touch in the crucial fourth period while staying sharp on the defensive end to run away to a 67-52 win. Angola won the Men's other semi-final over Mozambique. 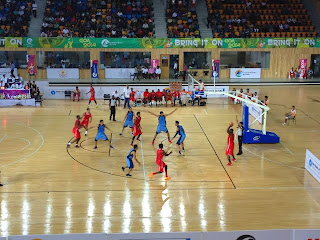 In a rematch of the group stage, India once again survived to clinch the basketball gold in the Final. "This was an opportunity to do something that may never come around again for a long time," said India's Head Coach Scott Flemming, "We were able to win a gold medal competing in an international tournament in our own country. I am really proud of these players. It was a great team effort."

The Women's basketball tournament didn't feature a knockout stage, but was decided between the four teams (India, Angola, Mozambique, Macau) in a round-robin league. India's young side - playing without experienced senior players and led mostly by under-21 talents - were led by Head Coach Francisco Garcia.

One of the biggest bright young talents in India is Kerala's Jeena PS, and she showed why with a dominating 26 point performance in India's opening game win against Macau. India took a massive 39-10 lead early and never slowed down. Firing from all cylinders, India raced to an easy 110-45 victory. Priti Kumari (17) and Rajapriyadarshini Rajaganapathi (16) added to India's scoring onslaught.

Angola and Mozambique were both finalists in the recent FIBA Africa Women's championship, and were both next on India's schedule. Dongue Leia of Mozambique scored 25 points to lead her team to an early lead over India which turned into a blowout by halftime. Mozambique came out as 92-46 victors. 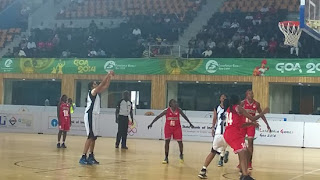 India's final game was against Angola, and the young girls were determined to finish the tournament with a flourish. Led by Poojamol KS - who had a game-high 22 - India stayed neck to neck with Angola for the first three quarters, and were only down by one before the start of the final period. But Angola made all the right plays in the fourth to extend their lead and survive to notch a 66-58 victory. Merciana Fernandes scored 17 to lead the Angolan side.

Mozambique were the strongest women's squad and finished the tournament undefeated at top to secure the gold, while Angola got the silver medal and India had to settle for bronze.

Francisco Garcia, the Coach of India's Women, said, "We played good matches against Macau and Angola. I think against Mozambique we should have been tougher, but overall, really happy with the team’s performance because we were close to the silver medal and we were the youngest team in the competition."

The Basketball Federation of India's (BFI) CEO congratulated both the squads for their performance. "The hard work and training has paid of for Team Goa-India. They have made the country proud and have given India a new milestone in the game of basketball to remember."

Get detailed results of the tournament via the BFI website here. More in-depth match reports and interviews with Coach Scott Flemming and Vishesh Bhriguvanshi can be found on Ekalavya Posts.

India's participation in the tournament provided the teams with some much needed practice and exposure. This year, while Men and Women Under-18 teams will play in the U18 FIBA Asia Championships, the Senior squads may also have a chance to participate in the basketball tournament at the 17th Asian Games, set to be held in Incheon, Korea from September 20 - October 3.