Uttarakhand's ONGC continued their hot form of dominance in Indian Men's basketball, and for the second consecutive year, emerged as the last team standing at the 28th Federation Cup All India Basketball Championship for Men and Women with a win over IOB (Tamil Nadu) in the Final of the tournament at the YMCA International Center in Ahmedabad, Gujarat on January 9. A year ago, Maharashtra's Women's side lost by just one point in the Final to Tamil Nadu; their nightmare was repeated this year as this time, it was Chhattisgarh that defeated Maharashtra in the Final by a single point to capture the gold.

The Federation Cup pitted India's most successful recent clubs or states against each other. In the Men's division, the participating teams were chosen from the best club sides from India's top ranking states in the previous National Basketball Championship, while the Women's teams were represented by the top rankings states or railway units themselves. The six-day tournament - organized by the BFI and the Gujarat Basketball Association - tipped off with nine Men's teams and eight Women's teams on January 4. 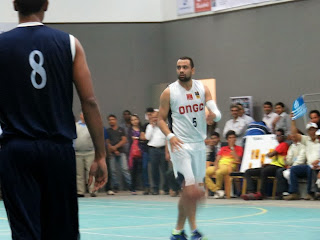 ONGC trailed by one at the end of the first quarter to IOB in the Men's Final, but shifted their strategy to go on a strong second quarter run which ultimately proved to be the difference between the two teams. Amrit Pal Singh of ONGC led the way with 24 points, and the IOB side couldn't recover from their halftime deficit in the second half. ONGC secured gold with a 61-53 win. Pratham Singh led with 16 points for the losing side.

For the second consecutive year, Maharashtra Women were in the Federation Cup Final, and once again, pushed the game to the very last seconds. Chhattisgarh, who have been developing some of India's finest players in recent years, were led by giant Poonam Chaturvedi's game-high 30 points in the Final. The back-and-forth game stayed close till the very end with numerous lead changes and momentum shifts for each team. Both teams were tied at 72 with two minutes left in the game, before Chhattisgarh pushed to go-ahead for good. A three by Maharashtra's Remu Maurya made it a one-point game, and Shireen Limaye missed another three at the buzzer to hand Chhattisgarh the victory in the thrilling encounter. Manisha Dange (19) and Smruthi Radhakrishnan (17) led the way for Maharashtra. Pushpa M scored 17 for Chhattisgarh.

Chhattisgarh's Radhakrishnan was named the Women's Most Valuable Player of the tournament, while the Men's MVP was India's national team superstar Vishesh Bhriguvanshi of the champions ONGC.

The third/fourth place games, to determine the bronze medal winners, were also held on January 9th. The Army Red Men's team of Services blew past Punjab's Border Security Force (BSF) for an easy 72-48 win behind 17 points by Mayur Bhat. In the Women's game, a second quarter surge gave Kerala a 58-43 win over Delhi. Kerala survived a 21 point barrage by Delhi's Madhu Kumari. 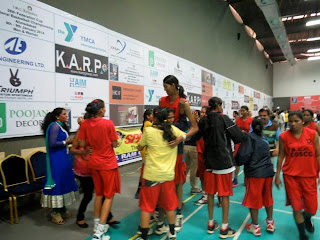 A day earlier - January 8th - the BFI conducted a coaches clinic at the YMCA International Center, bringing in 30 of the top local and some out-station coaches for a training session. The clinic was led by India's foreign head coaches of the Men's and Women's teams, Scott Flemming and Francisco Garcia.

The tournament's semi-finals were held the same day. After trailing by one to Army Red at the end of the third quarter, ONGC went on a blizzard to close out the fourth, outscoring their opponents 21-5 to secure the 69-54 win. Veterans Bhriguvanshi (20) and Trideep Rai (17) led the way for ONGC. In the second Men's Semi-Final, IOB survived a late surge by BSF to win 61-58. Davinder Hooda had 24 for BSF in the losing effort.

Both Women's semi-finals turned into blowouts. Maharashtra completely dominated Delhi led by the triumvirate of Manisha Dange (20), Shireen Limaye (19), and Renu Maurya (17) to cruise to a 89-49 victory. In the second semi-final, Chhattisgarh's Poonam Chaturvedi (26) and Anju Lakra (20) were unstoppable as they defeated rivals Kerala 80-57. Jeena PS had 22 points for the losing side. 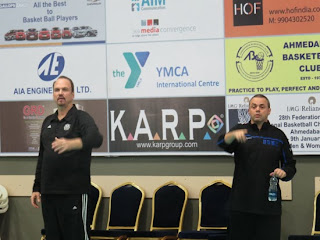