The biggest women's basketball tournament in the continent - and beyond! - was held in our very own shores as India hosted the FIBA Women's Asia Cup 2017 from July 23-29 in Bengaluru. The top teams from the Asia and Oceania region took part in a week of memorable action at the Sree Kantaveera Indoor Stadium. The event came to a breathless end with two huge moments on Saturday: Japan defeated Australia in a nail-biter to win their third straight gold medal; and India were lifted in spectacular fashion with a game-winning shot to the Division B title and promotion to the higher Division A. 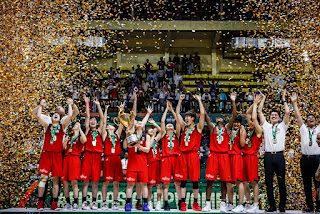 The FIBA Women's ABC was the first time India hosted a major FIBA event since the same championship was held in Chennai in 2009. A total of 15 teams took part this year in the two Divisions, featuring, for the first time, teams from the Oceania region, too. It was was the qualifying tournament for FIBA Asia at the 2018 FIBA Women's Basketball World Cup in Spain.

Japan landed in India as two-time holders of the title, including the most-recent win in 2015 at Wuhan, China. In Bengaluru, they finished another magical run with a thrilling final victory over Australia. In a contest truly befitting a final fight for the crown, Australia and Japan went through seven lead changes and several ties in the final. Shooting guard Saki Mizushima ended up being Japan's unlikely hero, exploding for 26 points in the final including a clutch three that broke the deadlock in the game's dying minutes. Australian superstar Kelsey Griffin scored 30 in the final, but her efforts weren't enough and Japan sneaked by to a 74-73 victory at the end of regulation. 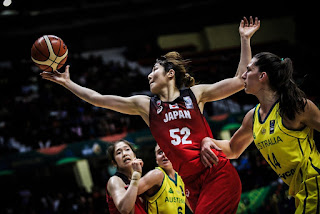 China won the bronze medal on Saturday with a comfortable 75-51 victory over Korea. Sijing Huang and Yueru Li each scored 16 for China in the victory.

The top four teams from Division A - Japan, Australia, China, and Korea - qualified for the FIBA Basketball World Cup 2018.

After falling out of the top division at the tournament's previous iteration in 2015, India had to begin the 2017 competition at home from Division B. They would have no chance to compete for the title, but a Division B victory could secure them a place in Division A for the next FIBA Asia Women's Cup. With this mission in mind, India hired Serbian head coach Zoran Visic to lead a healthy and talented squad, featuring important players like the veteran Anitha Paul Durai, Jeena Scaria, Shireen Limaye, Kavita Akula, and more. India were placed in Group A of Division B along with Sri Lanka, Uzbekistan, and American Samoa, but American Samoa pulled out of the tournament before it began. 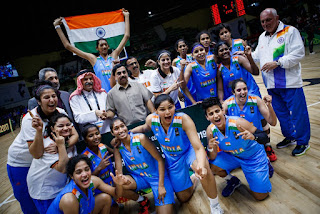 India opened their account on home floor against Uzbekistan in their first game, and captain Anitha Paul Durai ensured that the team got off to a positive start. A 19-9 run in the first quarter proved to be the big difference in the game. Paul Durai led all scorers with 28 points, five rebounds, and five assists. Grima Merlin Varghese, a late replacement to the squad in place of Poojamol KS, was India's surprise x-factor, scoring 17 in the victory.

India showed no mercy to South Asian neighbours Sri Lanka in their second preliminary group game, flying off to another quick start 23-10 and holding Sri Lanka to just three points in the second quarter. Varghese continued her dream run, pouring in 19 points and 10 rebounds for India's 88-42 win, which put them through to the Quarter-Final as group leaders. 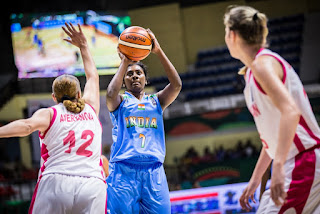 The semi-final presented India with their toughest challenge yet, against Lebanon. India had a hesitant start to the crucial match, and Lebanon, the more confident team from the get-go, marched to a 38-33 halftime lead. With Lebanon still leading by 2 at the end of the third quarter, India needed one last boost to carry them to the final stage. They got just that from Kerala's star Jeena Scaria, who went into beast mode in the fourth quarter, ultimately finishing with 20 points, 7 rebounds, and 6 assists to help India go on a late run and win the game 79-69. Raspreet Sidhu added 17 in the win. Lebanon's Rebecca Akl and Chirin El Charif scored 20 and 17 respectively in the loss.

India's biggest test, appropriately, came in the Division B final against Kazakhstan. Playing in-front of a sell-out home crowd in Bengaluru (which was a relief, after several days of sparse audience at the event), India once again started slow, and fell down by 14 points midway through the second half. Led by the amazing Nadezhda Kondrakova (who finished with 30 points and 18 rebounds) and Zalina Kurazova (17) Kazakhstan were up by 8 at the end of the third quarter. Once again, Scaria came to the rescue (20 points, 6 assists), helping ignite India's big comeback in the fourth quarter. In crunch time however, India's hero turned out to be All-Around talent Shireen Limaye. Limaye hit two huge baskets in the game's last minutes, including a memorable game-winning shot with just five seconds left on the clock that gave India the 73-71 victory. The heroics capped Limaye's biggest game of the tournament, as she finished with 17 points, 10 rebounds, and 6 assists.

73-73. 23.6 seconds left. Coming out of a time out. This happens. @shireenlimaye95 was a freaking beast! What a game. @india_basketball . #india #basketball #indiabasketball #fibaasiacup2017 #beastmode #comeback
A post shared by Jonathan Rego (@regosjonathan) on Jul 29, 2017 at 10:36am PDT

The victory earned India promotion into Division A for the next iteration of the tournament in 2019. They will replace North Korea, who will fall to Division B. 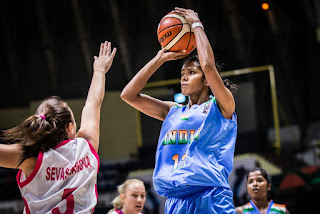 This well be a tournament that basketball fans won't easily forget. Even though India played in the lower division, they delighted the fans and the Basketball Federation of India (BFI) by going 5-0 with incredible performances, and then winning the division in dramatic fashion. BFI announced a reward of Rs. 15 lakhs for the team for their efforts.

Coach Visic's contract technically expires at the end of this tournament, and the BFI will now decide whether or not they will choose to extend this successful coach to stay and build up Indian basketball for a longer period.

The BFI counted another major win as they hosted Hall of Famer and Chinese basketball legend Yao Ming, who attended the FIBA Women's ABC in the knockout stages, too. 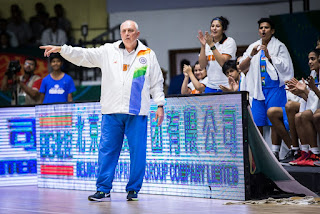 Paul Durai, who returned to this team after maternity leave, ended up as India's top scorer at the tournament (16.4 ppg). 22-year-old Varghese was the surprise package for the squad and should now feel confident of playing a major role in the team in the future, too. Raspreet Sidhu, Kavita Akula, Jeena Scaria, and Rajapriyadarshani Rajaganapathi were all part of India's main rotation throughout the tournament. And Limaye can return home safe knowing that she hit one of the biggest shots in Indian women basketball history! 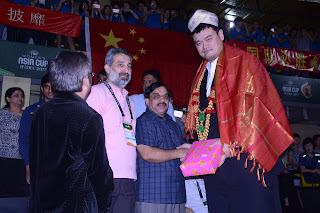