Hall of Famer Yao Ming is in India for the FIBA Women's Asia Cup in Bengaluru!


In what turned out to be a pleasant surprise, Chinese basketball legend and Basketball Hall of Famer Yao Ming arrived on India on Wednesday night to attend the FIBA Women's Asia Cup 2017 in Bengaluru. Yao, 36, indisputably the most successful Asian basketball player in history, retired from the game in 2011 and is currently the president of the Chinese Basketball Association (CBA). 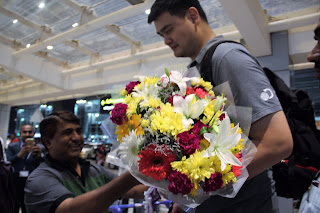 The FIBA Women's Asia Cup 2017 is the biggest competition for teams from Asia and Oceania, and is being held in India for the first time in eight years from July 23-29. Yao's country-women from China are once again one of the favourites at this tournament and have most-recently defeated the Philippines at Bengaluru's Sri Kantaveera Stadium to make it to the semi-finals.

This is huge news, metaphorically and literally. Despite ending his playing years early to chronic foot injuries, the 7-foot-6 Yao enjoyed a successful career. He excelled in the CBA with the Shanghai Sharks in his youth, became number one pick in the 2002 NBA Draft by the Houston Rockets, dominated the paint to become one of the league's best big men (he just happened to be playing in the Shaq era, unfortunately), and became one of the most popular basketball players worldwide. The Chinese sports icon won three FIBA Asia gold medals for his country and carried China's national flag for his delegation during the opening ceremony of the 2008 Beijing Olympics. In 2016, he was inducted into the Basketball Hall of Fame.

This is Yao's second trip to India. Before he got into the fast-lane to superstardom, Yao took an early step to success in Calcutta at the FIBA Asia U18 Championship back in 1998, as an 18-year-old. Yao was the best player in Team China at the tournament and helped with win the gold medal and took home the tournament's MVP trophy. He was a rookie with the Shanghai Sharks then, and a few years later won the CBA MVP award, the CBA title, and was drafted to the NBA, and the rest is history. During an interview I did with Yao in Shanghai for SLAM Magazine in 2014, he told me that he still harboured great memories of India because of his early success. China will be hoping that Yao's presence proves to be their good-luck charm as they look to end Japan's recent dominance at this competition and win the gold medal. Meanwhile, India is in Division B of the tournament and have a starkly different ambition: just to qualify for the higher Division A.

What makes Yao's trip even more special is that he arrived in India less than 24-hours before another worldwide super-duper basketball star, Kevin Durant. Durant, however, is spending in time in the north, where he will be training players at the NBA Academy India in Greater Noida.
Posted by KARAN MADHOK at 22:10