Two years after rising above all challengers to rise as the finest women's basketball team in the continent, Japan have done it again. Japan retained their title at the 2015 FIBA Asia Basketball Championship for Women on Saturday, September 5th, finishing the eight-day long tournament with a convincing win over hosts and rivals China 85-50 in the final at Wuhan. It was Japan's third gold medal at the tournament, which held its overall 26th iteration over the past week. 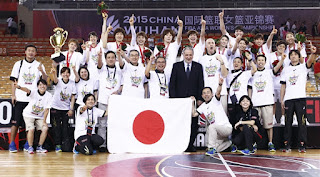 While the Japanese celebrated their triumph, the Indian contingent - a young, rebuilding squad - returned home disappointed, taking several steps back after their historic performance at this same tournament two years ago. Playing in the higher Level 1, India lost all five of their Preliminary Stage game to end the tournament at sixth place. They then lost a Level 1 playoff as well and fell to Level 2 for the 2017 FIBA Women's ABC.

Tipping off on August 29, the tournament in Wuhan turned out to be an all out showcase of Japan's strength and dominance over the rest of Asia, including the formidable Chinese. The clash in the final saw Japan attempt to silence a home crowd in their quest for a repeat victory at the championship. They did just that, and in style. Determined to close out the game early, Japan outscored the hosts by double digits in each of the first three quarters of the game, essentially turning the contest into a blowout victory before the start of the final period. Japan's star of the night was Sanae Motokawa, who led the way with a game-high 24 points in the win. Ramu Tokashiki added 18 points and 7 rebounds to Japan's cause. None of China's players were able to crack double digits in scoring.

Tokashiki was named MVP of the tournament. 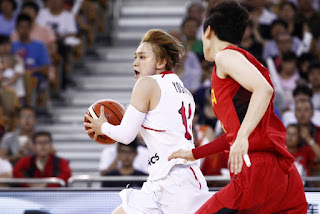 Earlier in the day, Korea defeated Chinese Taipei 52-45 in a more competitive game for third place. It was a close, defensive affair. Korea led 27-21 at halftime, and held on to their lead in the end for the win. Both teams only combined for 15 points in the final period.

Japan were given a tougher challenge a day earlier, in the Semi-Final stage, by Chinese Taipei. A 12-point first quarter Japan lead was cut down to 1 by halftime, and Chinese Taipei then proceeded to outplay Japan in the third to set up a crucial, deciding final period. It was here that Japan showed their strength again to bounce back and notch a 65-58 win. Taipei's Hsi-Le Bao put up a valiant effort in the losing cause with 18 points and nine rebounds. Later that day, China also stamped their place in the final by defeating Korea with ease. China's fast start had them up by 13 by the end of the first period, and they kept the pressure on until the final period, when finally, Korea notched a mini-comeback to make the final score - 60-45 - a little more respectable.

By winning the championship, Japan automatically qualified for the basketball tournament at the Rio Olympics in 2016. China (second) and Korea (third) booked their place in the Olympic qualification tournament. 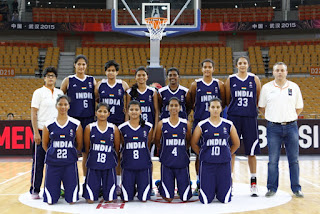 As usual, it was Asia's Big Four of Japan, China, Korea, and Chinese Taipei that finished with the four best records in Level 1. India and Thailand were the other two teams filling up the six spots

Team India - coached by Francisco Garcia and captained by Anitha Paul Durai - were looking to build on their historic momentum at this tournament in Bangkok two years ago, when they won their first-ever Level 1 game and finished at a best-ever fifth place. Unfortunately, the team lacked experience and ample time to prepare for this big tournament before setting out for Wuhan. Back home, the political drama plaguing the Basketball Federation of India (BFI) would have been unsettling several of the coaches and players, too. Of course, the team was also heading out to battle Asia's best without their talisman superstar and Arjuna Awardee Geethu Anna Jose, who had been Indian basketball's finest player for the past decade.

Playing against Level 1 teams was always going to be challenging for India, but they started off fearlessly against Chinese Taipei. Although India trailed at halftime of the first game by 12, there were some signs of confidence. Unfortunately, India's wary defense gave way for a scoring barrage for Taipei in the second half led by Yu-Chun Wei (20), and the Taiwanese squad eventually went on to win 92-61. India's best performer was youngster Poojamol KS, who led the way for her side with 17. 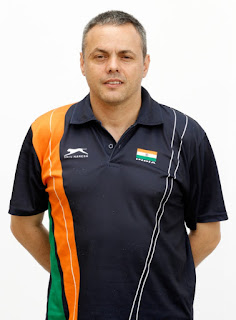 Things got ugly for India against eventual champs Japan in Game 2, one of the worst losses for the Senior Women's team in recent memory. Japan raced out to a 32-9 lead in the first quarter and had outclassed India on both sides of the floor to sit at a 63-21 advantage by halftime. India were outscored 25-6 in the third quarter, and in an especially devastating fourth period, India scored just four points while gave up 43 to the rampant Japanese. The final score read 131-31 in Japan's favour. Japan's trip of Mio Shinozaki (25), Mika Kurihara (19), and Al Mitani (16) rained in from all angles to aid Japan's win.

India played hosts China in Game 3, and faced similar humiliation, losing in their third consecutive blowout in three days. Led by 18 points and 12 rebounds by Song Gao, China's unstoppable attack deflated India's hopes early in the game and kept their command till the end. China outscored India 29-4 in the first quarter and led by 32 at halftime. India didn't manage to put up much of a fight after the halftime break and lost the game 102-39.

India's lone chance of Level 1 redemption was against Thailand, a game that Coach Garcia had earlier said would be what all the other games had been in preparation for. Unfortunately, India's slow start undid their game-plan early. Thailand took a 21-14 lead in the first quarter, and India were left playing catch-up thereafter. India did a good job of closing the deficit to four by halftime and tying scores before the final period, however. The game headed to an exciting conclusion, but it was Thailand who struck last, scoring a go-ahead layup with 16 seconds left in the game and surviving to win 65-63. Naphat Kruatiwa scored 21 for Thailand and Thidaporn Maihom added 19. India's best player of the night was Jeena PS, who led her team's attack with 21. 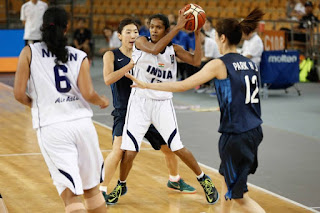 India were back to blowout losing ways in their final Preliminary Round game against Korea. The defense failed India again, as they led in 38 points while only scoring 13 in return in the first period. Korea led 67-20 by halftime and reached the 100-point early in the fourth quarter. On the backs of Danbi Kim (20) and Ji Su Park (19), Korea won the contest 121-44.

Confirmed to finish sixth in the tournament, India's final game in Wuhan was a Level 1 playoff against Level 2 winners, Philippines. In a fight to keep their higher group spot, India bucked the trend and started off the game much better the opponents, leading 22-16 at the end of the first quarter. But India couldn't keep up the pressure, eventually handing Philippines a two point lead before halftime, which stretched out to 12 before the start of the final period. India woke up to mount a comeback in the fourth quarter, but Philippines held on to close the game well and win 82-76. Afril Bernardino's 32 points sealed the deal for the Filipinos, while Allana Lim added 20. Jeena PS scored a personal tournament-high 28 points to go with six rebounds for India, while captain Anitha Paul Durai added 19. The loss for India meant that the Philippines will now replace India in Level 1 for the 2017 iteration of the tournament.

India finished the 2015 FIBA Women's ABC with a 0-6 record in sixth place and fell to Level 2 of the championship. 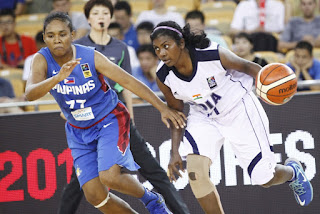 Before the tournament, Coach Garcia had bemoaned India's unfortunate lack of time in camp in preparation, and the team's faults showed clearly on both sides of the court in the big losses to the higher-seeded Level 1 teams. The loss of Geethu Anna Jose as the leader in the middle also didn't help India; her presence alone would have been enough to cause tactical headaches to Thailand and the Philippines. Against the latter two teams, India's played well but their fate was decided by the smallest of margins. The right bounce here or there, or the right attitude in clutch moments for India, would've seen the women return home much happier. Instead, they have taken a couple of steps back after taking one step forward in 2013.

One of the positives for India was the performance of Jeena PS, the Keralalite seen as the heir to her state's greatest product, Jose. Jeena led India with 14.3 points per game, which was fifth-best of all players in the tournament. She was also India's leader in rebounds (5.8).

The conclusion of the tournament leaves India with many more questions for the future. Coach Garcia's contract comes to an end now and he will return to Spain. There is still no confirmation whether or not he will return to India to coach again. Jose's future return for the team is in doubt, and current captain Paul Durai isn't getting any younger. One of the player's who was supposed to be India's future leaders - Shireen Limaye - had a disappointing tournament after return from her knee injury. The trio of Jeena PS, Poojamol KS, and Bhandavya HM will have to carry the mantle forward for the Indian Women's team in the future.