At the 2017 William Jones Cup for Men in Chinese Taipei, an invitational tournament held mainly among Asian squads as preparation for the larger FIBA Asia Cup next month, the two best teams ended up being dominant club squads from outside the continent. The squad from 3D Global Sports Canada and Atletas All-Star Lithuania finished with the tournament's best records (8-1) after nine days of breathless action concluded on July 23rd. With the best point-differential, 3D Canada lifted the championship trophy on Sunday at the Taipei Peace International Basketball Hall. India, led by brand-new NBA-experienced head coach Phil Weber, suffered from injuries and absences and sent a depleted squad for the tournament. With most of the squads present ranked higher, India were always going to be underdogs at this event, and despite a few standout individual performances, they returned from Taipei without notching a win and finishing at ninth (last) place. 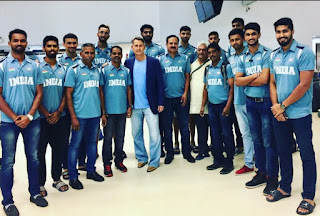 The 0-9 record will cause some sullen faces for the national team stars, but the silver lining to the dark cloud is that Weber was able to get his first outing in rapid-fire succession and get a crash course in competitive basketball for India and our opponents. Leading India with 18.1 points per game, Amjyot Singh finished as the tournament's fifth-highest scorer. Muin Bek Hafeez and Anil Kumar Gowda also earned valuable playing time for India in the course of the nine games.

India will now turn their gaze to Lebanon, which will be hosting the massive 2017 FIBA Asia Cup from August 8-20. India is placed in Group A with Iran, Jordan and Syria. The loss to Iran will give Weber some scouting knowledge to build upon, and at full-strength, India has the talent to challenge for second-place in their group. Hopefully, Weber has the squad at the best of their health at his disposal and finally get this debut victory as national team coach under the brighter lights next month.