Under the leadership of a new, foreign head coach, India's women's team got off to a bumpy start in their first outing - the 2017 William Jones Cup in Chinese Taipei - but gained valuable experience against much-better squads to bring back home with them for the bigger challenge ahead. India were one of six Women's teams that took part in the 39th William Jones Cup, a round robin tournament at the Changhua Gymnasium in Changhua in Chinese Taipei as a preparatory outing before the FIBA Asia Cup for Women destined to be held back at home in Bengaluru at the end of July. India were the only Division B team (the lower pool of the FIBA Asia Cup) at William Jones and lost all of their games to end at the bottom of the table. Nevertheless, the tournament turned out to be crucial for new Serbian head coach Zoran Visic to tinker with the team's lineups, instill some of his coaching style and philosophies, and provide the women with necessary competitive-game experience.

Three teams - Japan, New Zealand, and Chinese Taipei Blue - finished with identical 4-1 records to top the tournament fray, with a total of 9 points each and identical 1-1 records against each other. Japan, the current Asian champions, held the tie-breaker differential between the three teams with +1.07, and thus were named champions. 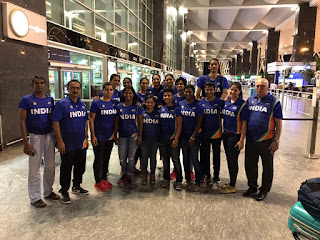 India's 0-5 record dropped them to sixth/last place in the tournament. India were definitely a pace slower than all of their Division A opponents, but played a great game against South Korea in the close loss. Visic relied on the team's eldest players - Raspreet Sidhu and Anitha Paul Durai - to play the bulk of the minutes for the team. Paul Durai, Jeena Scaria, and Sidhu were India's top three scorers. Kavita Akula, Rajapriyadharshini Rajaganapathi, and Shireen Limaye also got to play major minutes through the course of the tournament.

India will now come back home for the FIBA Asia Cup in Bengaluru from July 23-29. In an interview a few weeks ago, Coach Visic had told me that the team will have to overcome their relative inexperience if they hope to win Division B and be relegated to the higher division for the Cup's next iteration. After playing against tougher opponents in Chinese Taipei, India should find their group - with Sri Lanka and Uzbekistan - a little easier. They will have to overcome Division B's Group B winners next, most likely to be Lebanon or Kazakhstan. With a home crowd cheering behind him, let's hope that the team can bounce back to Asia's higher level.

India are participating in the men's William Jones Cup, too, set to begin in Chinese Taipei on July 15.
Posted by KARAN MADHOK at 22:57