After several years preparing in the background for the big moment, the Basketball India Players Association (BIPA) formally launched on Saturday, July 29, at the Constitutional Club in New Delhi, in the presence of Olympians, former captains and distinguished awardees of the game. Registered as a non-profit company, The BIPA will be an organisation hoping to promote the game without being in “confrontation or competition” with any federation or association - which means, of course, the Basketball Federation of India (BFI). 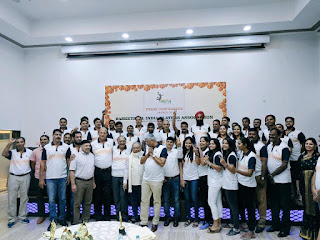 Straightaway, BIPA announced the launch of a massive 16-city, 1,024-team inter-school basketball league, which will begin next month all across the country.

The BIPA have several objectives for current and former players, listed on his blog by Aruneshwar Gupta, including lifelong security, medical coverage, pension benefits, marketing, help with contractual rights, and mentoring of players and their families. According to Gupta, BIPA is the one of the largest players association in the country and possibly in the world with about 2,800 members who are basketball players, coaches, referees, ground officials, physiotherapists, dietitians, and other stakeholders. The membership is likely to increase to 20,000 by the end of the year.

Dutt, the chief guest at the launch, said at the event, "In any game, the voice of the players, has to be heard. It is great that all the great players have got together."

More details of the BIPA launch and future plans via The Hindu:

The Inter-school tournament will feature events for boys and girls in the under-14 and under-17 sections, in Bengaluru, Bhopal, Bhubaneswar, Chennai, Delhi, Dehradun, Gurugram, Hyderabad, Indore, Jaipur, Kolkata, Mumbai, Noida, Pune, Raipur and Thiruvananthapuram. It will be played from August 23 to September 6.

There will also be clinics by the leading players of the game to inspire school kids and strengthen their bond with the game.
On the occasion, Olympians Ajmer Singh, Hanuman Singh, Paramjit Singh, Zoravar Singh, Baldev Singh, T.S. Sandhu and Gyan Singh were honoured, along with a host of other players like Ram Kumar, Trideep Rai, Divya Singh, Prashanti Singh, Akanksha Singh, Pratima Singh etc.