For several years, the Anantapur Sports Academy (ASA) has been organising grassroots sports activities in the Anantapur (Andhra Pradesh) region, with a mission to bring out the hidden talents of rural Indian children in different sporting disciplines. A part of the Rural Development Trust (RDT), ASA is considered to be one of the largest sport for development programs, providing participating youth with infrastructure, equipment and coaching support. 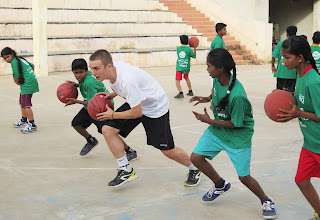 ASA currently runs an established three-tiered structure to develop sports in seven major sporting disciplines, Football, Hockey, Cricket, Judo, Tennis, Softball and Special Olympics. But over the past week, they got some international help to spread their wings and bring some Basketball joy to hundreds of rural kids in Anantapur, too.

From July 16-29, 2016, fourteen coaches from two Spanish basketball clubs from the town of Sant Cugat del Valles - Unió Esportiva Sant Cugat (UESC) and QBasket Sant Cugat (QBSC) - were in India, and they trained about 220 children from all over Andhra Pradesh at three different venues. The camp was held in collaboration with the RDT, Fundación Vicente Ferrer, and the Sant Cugat Esport FC Spanish football club who had been holding football camps in Anantpur since 2013.

Oriol Antras Marti, UESC's coordinator for the duration of this camp, said "We are very glad to associate ourselves with RDT to organise this camp. SCEFC is here for their fourth camp, they have established, a structure for football, and a strong bond with the children and associated personnel. This has helped them grow the game of football greatly over just four years. Which is why we are looking to follow their lead, establish a similar structure and emulate them to try and grow Basketball in Anantapur similar to how they have done with football." 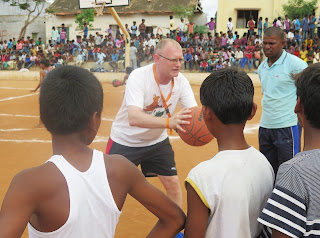 Maxon Sequira, a member of the ASA Communications team, wrote that the prime objective behind organising the camp was to encourage the existing Basketball playing youngsters to continue playing the sport and introduce the sport to the younger non playing children who poured in from some of the most remote villages of Anantapur and nearby districts to learn and play Basketball.

Sequire added that apart from the daily coaching sessions, the coaches also met with local associations, coaches and PE teachers on their visits to the villages in Anantapur. They aimed to educate these people and equip them with necessary skills to carry on the work of promoting the sport till the next camp.

UESC and QBasket are both in the Spanish fourth division and Catalan first division.
Posted by KARAN MADHOK at 15:01