After a gap of one year, India's biggest official school basketball tournament - the Indian School Basketball League (ISBL) is set to make a return to 16 states around the country from August 2016. In a special press conference in Bengaluru on Thursday, the Basketball Federation of India (BFI) announced that this season's ISBL will play out approximately 1,856 matches over a 2-3 month period, culminating in a National Finals to be held in one of the participating states/cities. The 2016 season will only feature the ISBL; the Indian College Basketball League (ICBL) continues to face its hiatus for now. 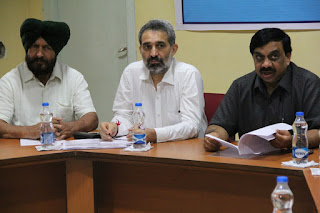 In a press conference headed by President K Govindaraj, Secretary-General Chander Mukhi Sharma, and Senior Vice President Teja Singh Dhaliwal, the BFI announced that the 2016 edition will create a structured, self-sustaining, pan-India School League, which will serve as the platform to increase organised basketball participation at grassroots level and subsequently become a talent development/feeder system for the Indian National Teams. Eventually, the aim is for this league to also become a talent development platform for the future Professional Basketball League in India. This decision was taken after the Steering Committee of the BFI met on July 6 to finalize the details of the league.

In each state, 12 to 16 teams for each gender will be divided into four groups (in 2014, 24 cities took part). For some states, this year of the league will focus on teams from just one city, while others will bring in talent from many different cities in the state. Each team will play home-and-away system within their own group. The top 2 teams from each group will play a State Final, and the winner will eventually be invited to the National Championship. The prize money is set at Rs. 1 lakh in each participating state.

In a press release, the BFI announced that creating a hierarchical system of basketball participation that starts with the school leagues will be key to the long-term growth of basketball across India. To ensure the sustenance of the leagues, it is imperative to start small, focusing on the high basketball potential cities, perfecting the operations while showing its value and potential to the community, and then slowly transitioning to pan India leagues which include newer basketball cities. The leagues will also serve a vital role in development of school basketball infrastructure and ancillary basketball disciplines as programs will be implemented to develop all areas of the game through this platform.

The 'bottom up' approach is of course different from the UBA Basketball League, who brought together interested players from All India College Championships to a quick launch and are already in their third season. The BFI, who have recently barred UBA players from participating in official national/international basketball events, are taking the big picture, long-term approach to build their way up to a professional league in India. But the start-stop nature and unreliability stemming from BFI's recent conflicts have slowed this process even further. Hopefully, the launch of this massive grassroots programme that the basketball in India is back on the mend from the ground up.