Why do we play basketball? 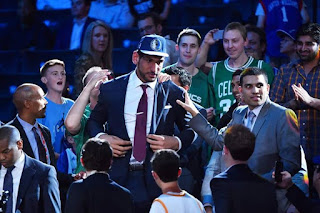 The NBA has a long history of inspirational and amazing ad campaigns to preview an upcoming season or playoffs. Remember the legendary 'Where Amazing Happens' series? Or how the NBA went BIG? One of my favourites was when the league brought together with some deft video-shopping the greatest players from the past and present into the 'Forever' ad on TNT.

With just two weeks to go for the start of the 2015-16 NBA season, the NBA is back with a brand new ad campaign: "This is why we play." And they released the first spot from this campaign named "Anthem" in full just two days ago.

Surprise, surprise. For the first time, the official NBA ad has a distinctly Indian flavour to it.

India has taken a few important steps to becoming an attractive hoops destination and major NBA market in recent years. There is now an Indian majority-owner in the league (Vivek Ranadive - Sacramento Kings), there was the first Indian-origin player to play in the NBA (Sim Bhullar - Sacramento Kings), and the biggest news yet: a 7-footed teenager made it all the way out of his little pind in Punjab to become the first Indian citizen drafted into the league (Satnam Singh - Dallas Mavericks). Back home in India, the NBA has expanded its grassroots presence considerably over the last few years and have more viewership for their broadcasts than ever before. 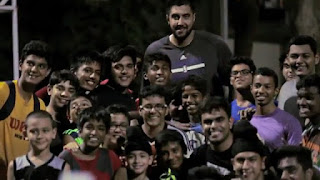 So its only right that the NBA decided to give a slight nod towards India as they prep for what hopes to be the biggest season ever for the Indian audience. The 'This is why we play: Anthem' ad begins in India, with kids in Mahindra NBA Challenge jerseys in Mumbai cheering on a dunk recorded on Google Glass. The dunker, who was not visible, was an Indian kid, carried up to the basket by none other than Sim Bhullar. Bhullar made a surprise stop at the YMCA Bandra in Mumbai during his India trip this summer.

Around the 45 second mark, India is seen again. This time, it's a photograph of Satnam Singh and his family visiting the Golden Temple in Amritsar during Satnam's first visit back to his homeland after getting drafted 52nd by the Mavericks. A second later, we see a clip of the moment Satnam is drafted, and of the emotional, overjoyed big man wiping his teary eyes at the realization of his biggest dreams. Satnam has played for the Mavericks in the Summer League, and although he's been promised a chance with the D-League's Texas Legends, it is still unclear if he'll make their roster. Still, being drafted was a great barrier-breaking achievement which deserves to be recognized.

The rest of the minute-long ad meshes together the NBA's international reach with some of its biggest stars. There are scenes from China and Africa, of Stephen Curry as a child and of Kevin Durant in Rucker Park. We see Magic and Bird, Willis Reed, Jerry West, and Reggie Miller. We see LeBron James, Zach LaVine, Yao Ming, Carmelo Anthony, Dwyane Wade, and Chris Bosh. We see Wheelchair Basketball players and grannies playing hoops. The clip features the first openly-gay player in the NBA (Jason Collins), the first womens assistant coach (Becky Hammon), and of course, the first Indian (Satnam). We see championship, celebrated by the players who won them and the fans to celebrated.

It's a great ad, and it's able to pack in a myriad of basketball emotions - beyond the NBA - under 60 seconds. Hopefully, the future ads in this series are just an inspiring (and just as flavoured with Indian masala!)