ShareThis
You're talented. I mean, really talented. You wake up early to spend time on the basketball court, come home early from school to keep playing, and make the court your bedroom, your kitchen, your hangout, and your pilgrimage all weekend. None of your friends have been able to defeat you yet, and every team you join ultimately wins at pick-up games. You are the best player in your school team, have had the opportunity to represent your district and your state at official tournaments, and have real hopes of wearing an 'India' jersey in the future.

But, beyond your achievements, you spend your time off the court watching the NBA on TV or highlights on YouTube. You want to ball like Durant, Davis, LeBron, and Westbrook. You want to ball alongside Curry, Harden, Paul, and Griffin. You want to wear an NBA jersey. You dream of it so much that you can hardly sleep.

You have the talent and the drive. But how are you ever going to get there? How will the NBA even know of your existence?

Behold! The path to turning your dream into a reality is about to become a lot clearer.

Earlier this year, Satnam Singh from Ballo Ke village in Punjab made history by becoming the first Indian to be drafted into the NBA, when he was picked 52nd by the Dallas Mavericks. The NBA has partnered with the ACG Worldwide Group to launch the first-ever talent search programme in India to identify players who can follow in the footsteps of Satnam.

The ACG-NBA Jump programme is set to provide basketball players between the ages of 18-22 from around the country the opportunity to develop their skills and one top player from the programme would also receive the opportunity to attend the NBA Development League (NBA D-League) National Tryout in the United States, reported an AP news report on FirstPost.

The programme would be split into three phases. In the first phase, six regional, one-day elite camps will be held in six cities: Delhi (Oct 26), Chandigarh (Nov 21), Hyderabad (Nov 28), Mumbai (Dec 12), Kolkata (Jan 9), and Chennai (Jan 16). According to a report on the Times of India, around 3-5 international coaches from across the globe will conduct the open try out session in all the six cities.The second phase would consist of a national elite training camp where 32 players selected from the six regional camps would assemble for a four-day training period. In the third and final phase, one top player from the national elite training camp would be selected to attend the NBDL Tryout in the USA for the opportunity to earn a spot on a D-League roster. The selected player would continue to undergo training up until the tryout in June 2016. Sony SIX, the official broadcaster of the NBA in India, will create a feature around ACG-NBA Jump, following the programme through its various stages and tracking the winner till his NBA D-league tryout.

Satnam will himself be present to launch the ACG-NBA Jump at the Thyagaraj Stadium in New Delhi on October 26.

"We strongly believe in the potential of India's youth and believe in empowering them through sport. ACG-NBA Jump is an equal opportunity programme for many who are talented but may not have the access," said ACG Director Karan Singh.

"This programme is part of ACG Cares Foundation and we are sure that with more programmes like this, India's basketball teams will have a richer talent pool to choose from. With the help of such programmes, we are confident that India's performance on international platforms such as the Olympics and Asian Games will improve," he added.

"ACG-NBA Jump is the next step in our continued commitment to grow the game of basketball in India," said NBA India Managing Director Yannick Colaco. 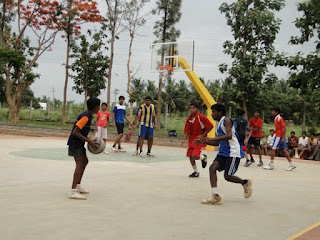 "With Sim Bhullar becoming the first player of Indian descent to play in the NBA and Satnam Singh becoming the first Indian-born player to be drafted into the NBA, basketball playing youth in India now have relatable figures to look up to, and this programme will give them the opportunity of a direct path to the professional ranks," he added.

Satnam's journey to the NBA came to realization through a mixture of talent and luck. Satnam was a seven footer by the time he was 14 and began to dominate Indian junior tournaments. Around the same time, IMG Reliance decided to provide its first (and thus far, only) scholarship programme to take young Indian players to High School and basketball training to Bradenton in Florida. Over at the IMG Academy, Satnam received world-class coaching and top exposure to improve enough by 19 that he eventually got on the NBA radar, and thus, was able to be drafted.

The 'Satnam model' may never be replicated again, but the ACG-NBA Jump should be able to cast a wider net and provide a goal for more young NBA aspirants in India to aim for. You don't need to be seven feet tall to be noticed anymore; if you have talent and can stand out (in any way) against other top competitors, you can be the next big Indian basketball star. What more, you are set to receive high-level coaching on the road to your goal; the winner of the competition and all other participants can all benefit from the teaching and come out of this programme as better basketball players.

So keep playing, keep practicing, and keep competing. There is hope now. Those NBA dreams should start becoming a little more vivid. It's still a long road: the best among the best of the talent crop has to be selected as a high performer from his city, be the best among an elite group of 32, impress enough at a D-League camp against other hungry and talented players from all around the world, and play well enough for his D-League team to even get a sniff at an NBA jersey. But hey, nobody said that making the NBA - featuring the best basketball players in the planet - was ever going to be easy. Only the best from India can master the path to greatness; but now, at least there's a path.

Hopefully, there will be more Indians competing for a spot in the NBDL or the NBA in the near future, and eventually, the talent pool of India basketball as a whole improves, too.

You can find more information and register for the ACG-NBA Jump at their official website here.