Earlier this year, soon after becoming the first Indian-origin player to play in the NBA, Canadian seven-footer Sim Bhullar made a high-profile trip to his parents homeland, India, to promote the sport of basketball. Now, he is taking another trip homewards - this time to the city that truly honed him: Toronto. 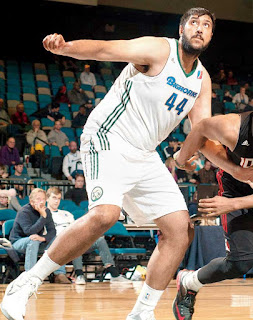 Bhullar has been traded by the Sacramento Kings' affiliate NBA D-League team Reno Bighorns - where he played most of last season - to his hometown Toronto Raptors 905, who the D-League affiliate of the NBA's Toronto Raptors. Reno acquired guard Ricky Ledo in return for Bhullar from Toronto.

Bhullar spent most of last season in Reno, where he improved month by month and eventually finished the season with averages of 10.3 points, 8.8 rebounds, and D-League leading 3.87 blocks per game. The 7-foot-5 giant's performances (and of course, the potential of inspiring the Indian market) helped him earn a 10-day contract with the Sacramento Kings. He made his debut against the Minnesota Timberwolves towards the end of the 2014-15 NBA season, and made history on the way by becoming the first player of Indian-origin to play in an NBA game.

Bhullar, a Toronto native who also played for Canada's national team at the Pan-Am games, will bring additional excitement to home fans in Toronto as he plays for the 905 for the coming season. Hopefully his performances are able to earn him a return spot to the NBA with the Toronto Raptors.