In one of the most hallowed grounds for Indian basketball, the next generation of the country's basketball stars (under 18s) showcased their skill-sets and their potential, the future merged into the present, and new stars were born. The 66th Junior National Basketball Championship for Boys and Girls were held at the Guru Nanak Stadium in Ludhiana (Punjab) from October 2-9. At the tournament's finale on Friday, October 9th, Tamil Nadu Boys rose above the competition to win the gold medal, while Chhattisgarh's unstoppable girls team notched another victory, completing an impressive threepeat in the championship. 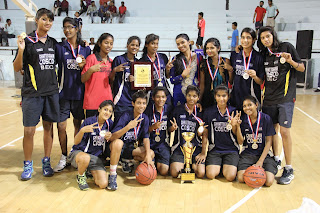 Both the defending champions from last year - Chhattisgarh Girls and Punjab Boys (who also enjoyed a strong home support - reached the final again this year and had the opportunity to repeat. Chhattisgarh faced an improving Karnataka squad in the final that turned out to be a classic battle between two rising stars of the game, Chhattisgarh's Riya Verma and Karnataka's Bhandavya HM, who had recently returned from national team duty for India at the 2015 FIBA Asia Basketball Championship. While Chhattisgarh started as favourites, it was Karnataka that took the strong early lead, opening up a 24-11 advantage in the first quarter. Karnataka had command for the majority of the game, and found themselves holding on to a comfortable 54-39 lead before the final period began. But it was the fourth quarter that showed Chhattisgarh's true mettle: In a comeback for the ages, Chhattisgarh caught fire from the three-point line in the fourth to outscore Karnataka 28-9 in the period, eventually holding on to a slim 67-63 lead as time expired. Riya Verma scored 37 points in the game, including five three-pointers in the fourth quarter alone. Bhandavya HM had 31 for Karnataka in the loss.

Starting as reigning champions and hosts, Punjab were certainly the favourites in the boys' final. But they were facing a deep and experienced Tamil Nadu squad. The two teams matched their firepower in another final for the ages. Little separated the two teams in this back and forth contest. TN had a slim, 43-40 lead at halftime, which Punjab quickly recovered, and then lost again. And back and forth they went. R. Hari Ram (21) managed to put TN up in front in the final minute by getting to the charity stripe and knocking down clutch free-throws. His teammate Baladhaneshwar (18) forced a crucial turnoA ver with under a minute to go in the game by stealing the ball from Rahul Mehla (28). TN won the game 91-86. A. Daniel Richards added 16 for the winners, while Mehla's effort for Punjab was aided by Jaipal Singh Mann (19).

Satnam Singh, the product of Ludhiana's Basketball Academy who this summer made history by becoming the first Indian player to be drafted into the NBA, was present at the awards ceremony of the Junior Nationals and greeted the participating players.

A day earlier, Karnataka's Girls outlasted neighbours Kerala 76-66 to win their semi-final clash. Bhoomika P scored 21 for Karnataka in the win while Bhandavya (19) and Priyanka P (16) helped with the offensive firepower. Kerala's leading scorer was Mayuka with 17 points. In the other girls' semi-final, Chhattisgarh showed no mercy to silence Punjab in front of their home crowd en route to a 78-49 win. Vandana paced Chhattisgarh with 23 while Punjab's leading scorer was Gagandeep Kaur (17).

MVP R. Hari Ram was on fire in the boys' semi-final for TN against Haryana, scoring 35 points to lead all scorers in a 99-85 win. Haryana kept pace with TN For three quarters and held a four point lead before the start of the fourth. But Hari Ram and TN took over from their, outscoring their opponents by 18 in the final period for the decisive win. P. Baladhaneshwar added 20 for TN while S. Kalidas had 19. Haryana were paced by Sonu Kumar (20) and Deepak (18) in the loss. In the other semi-final, Punjab outlasted Delhi and a magnificent individual effort by Sunil Kumar (32) to win 85-74. Punjab trailed by a close margin for most of the game, but once again, the fourth quarter proved to be the difference, as they turned a one-point disadvantage into an 11-point win. Dilpreet scored 21 for Punjab, while Delhi's Erash Hooda scored 17 in the loss.