2015 Junior (U18) National Basketball Championship tips off in Ludhiana (Punjab)


There is a 'Wall of Fame' at the Ludhiana Basketball Academy (LBA) at the Punjabi city's Guru Nanak Indoor Stadium, featuring photographs of some of the greatest basketball products of the academy and the coaches or patrons who helped the success from above. The Wall features faces of the legendary late LBA coach Dr S Subramanian and former late Basketball Federation of India (BFI) CEO Harish Sharma over the faces of LBA talents of the past, present, and future, including Palpreet Singh, Amjyot Singh, Jagdeep Singh Bains, Ranbir Chopra, and Satnam Singh. Every new basketball prospect that enters the arena remains close to the watchful gaze of these legends and is only an inspired moment away from following in their footsteps. 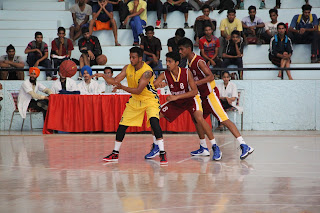 On Friday, October 2, Ludhiana - already a hotbed for Indian basketball - became the center of attention for hoops in the country again, bringing together of hundreds of under-18 basketball talents to find inspiration in the hallowed ground of the Guru Nanak Stadium for India's largest junior basketball meet. The 66th Junior National Basketball Championship for Boys and Girls tipped off on October 2nd and is set to be held until October 9th in Ludhiana. 24 boys' and 24 girls' teams from all over India have descended to Punjab for the tournament, which is being organized by the Punjab Basketball Association under the aegis of the BFI.

The hosts Punjab's boys team will step out to the tournament with heavy expectations: they are the tournament's reigning champions after clinching the title last year in Kochi and will have the advantage of home court and passionate home fans behind them this year. 2013 winners and 2014 runners-up Delhi will look to give Punjab a run for their money again, while Tamil Nadu and Maharashtra will also field strong squads. In the girls' division, Chhattisgarh will look to make it three wins in three years, but will have to fend strong opponents like Kerala, Uttar Pradesh, and hosts Punjab. 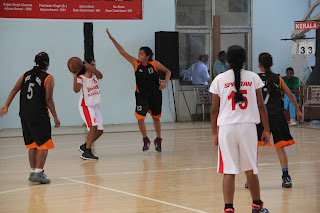 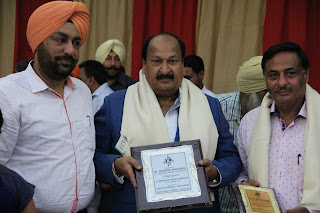 Uttar Pradesh girls got off to a winning start as they pulled away in the fourth quarter against Haryana in a Group B win. UP's Shreyasi scored 18 to open her account for the tournament. In another Group B clash, Kerala showed no mercy to West Bengal, holding their opponents down to less than five points her quarter en route to a 59-15 win.

The boys' division saw two athletic squads - Madhya Pradesh and Karnataka - give the fans something to cheer for. MP's Mithun (18) and Karnataka's Karthikh (19) went head to head in an exciting game. After leading by one at the beginning of the fourth quarter, MP finally pulled away in the end and won 58-50. In another boys' clash, Tamil Nadu showcased their offensive firepower to blow out Kerala 80-59. R. Hari Ram and A. Surya each scored 23 for TN who held an 11 point lead at halftime and found themselves up by 20 in the third before taking their feet off the pedal a little as the game ended.