At the FIBA Asia Cup in Wuhan last year, India's Men's national basketball team faced an unexpected distraction. At the very last minute, FIBA decided to impose their rudimentary 'No Headgear' rule, forcing India's Sikh players - Amrit Pal Singh and Amjyot Singh - to play without their turbans before their first game against Japan. Amrit Pal and Amjyot were in a fix: the frontcourt combo were (and still are) the heart and soul of the national team, but playing without a turban would have been an insult to their religious customs. Scott Flemming - the head coach of Team India - clashed with the tournament's organizers in behalf of his players, but to no avail. Understanding completely the dilemma that the two young stars faced, Flemming allowed them to opt out from the game, putting no pressure on the two to bow down to FIBA's ruling. Without them, India would have stood no chance at sniffing any victories at the tournament, but if they played, the two players would be making important personal sacrifices.

Despite their outrage, Amrit Pal and Amjyot made that sacrifice and decided to play. By the time the tournament ended, it became one of the most successful performances by Indian Men abroad in recent decades. The two big men played a major role in India's success, and they did it - regrettably - without their turbans. They did it for their country, their teammates, and as they told me later, for their coach. It was a rare occasion in Indian basketball where a coach had been able to create a true family atmosphere in the national team system. Not even the needless FIBA distraction could break their spirit, and it's a spirit that Flemming played a major role in cultivating. 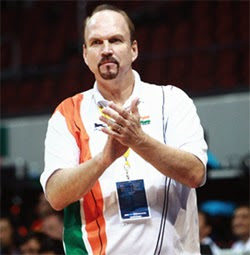 India lost that game to Japan, but a day later, scored their biggest-ever international win, the 'Wonder of Wuhan', by defeating hosts and Asian giants China. Although India only finished 7th eventually at the tournament, they gave a tough fight to FIBA Asia Championship finalists Iran and Philippines as well. Flemming's squad had fired warning shots to the rest of the continent that the sleeping giant was finally ready to awaken.

And yet, despite the on-court success, it was the off-court influence of Flemming on Team India that truly struck me. He had coached a group of individuals to become a strong unit, and that off-court coaching naturally translated to improved performances on-court. Over the last two and a half years, Flemming has helped the national team hold their heads up higher with respectable performances at the FIBA Asia Championship, the Lusofonia Games, the FIBA Asia Cup, the Asian Games, and more, and play together with pride. In a country with fleeting basketball success where foreign coaches had been hired and dropped like flies, Flemming had lasted the test of time and the challenges of a broken system to become arguably India's greatest international coach ever.

But all good things must come to an end, and today, they finally have. Flemming has resigned from his job in India and the Americna coach will be headed back to his homeland leaving behind an unmatched legacy in Indian basketball.  The Northwest Nazarene University (NNU) in Idaho announced that Flemming has signed on as Head Coach of the Crusaders (NCAA Division II) starting this season. 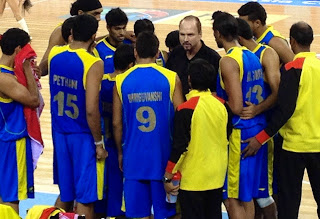 "I can’t imagine my life without India," Flemming told me in an e-mail, "I would do it all over again. To be honest, it has been very challenging at times but also extremely rewarding. I have really enjoyed working with all the different age groups in our national camps as well as the independent camps and clinics I have done. I have made so many good friends in the India basketball family. I really appreciate how the players accepted me on our national team with all my new ideas and terminology. I have become close with many of them and that is one of the reasons I do what I do. We really grew as a team and they are like family to me. I am proud of the progress we have made and I am trusting that this can be built upon for greater days ahead."

"I want to thank Basketball Federation of India (BFI) and IMG-Reliance for giving me this opportunity," he added, "I hope to stay connected in some role and maybe even come back in a few years and coach the team on a short-term assignment if they would want me to. Everyone has been so kind to Chawn and I and it has changed us for the better. I will be following the teams through the tournaments and pulling for them even in the United States. I wish India basketball only the very best for the days ahead. GO INDIA!"

Flemming had been hired by the BFI in September 2012 after 30 years of coaching experience in the USA, including serving as an assistant coach with the NBDL squad Texas Legends. In India, beyond his international influence, Flemming also served as an adviser to coaches domestically, helping to further cultivate and grow basketball at the grassroots level in India. He took part in various Coaches Coaching programmes around the country, launched the Indian Basketball Coaches Network (IBCN), and made basketball player development videos to reach out to the legions of hoop hopefuls in India. He and his wife Chawn forged valuable relationships with coaches and players in India and he went out of his way to have honest and open communication through interviews, his blog, and social media with the Indian fans and media. Flemming was the first-ever guest when Kaushik Lakshman and I launched the Hoopdarshan podcast on Indian basketball in late March. 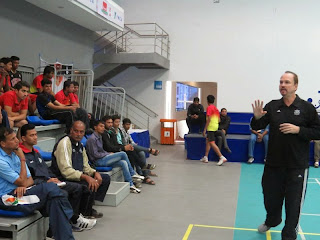 His departure leaves a major leadership void atop the national programme and adds another dent to India's future hopes internationally. A few weeks ago, it was announced that the BFI had not picked up on the contract extensions of India's Women's national team coach Francisco Garcia and Strength and Conditioning Coach Tommy Heffelfinger. In a few months, India's Men and Women will be taking part in separate FIBA Asia Championships, the biggest international tournament for Indian basketball teams. The timing for being without expert coaches who had built real continuity within the system couldn't be any worse. For every step forward, Indian basketball seems to be taking two steps back.

Several of India's top players were obviously saddened to see him go. "It's a big loss for the Indian national team," said international guard and former captain Vishesh Bhriguvanshi, "Flemming made good and positive results to team. I will only wish him luck that wherever he goes, he has a great life. And a big thank you!"

"It's very disappointing to hear that Flemming resigned as our coach," said India's starting point guard Joginder Singh, "We love to work with him. He is a great coach. I wish him luck for the future and send him a big thank you."

No matter where his career takes him, Coach Flemming will always have the love and support from the family he leaves behind in India. Sometimes, basketball achievement can be only about the bottom lines, the 'W's and the 'L's, but in Flemming's case, one can put no value on the achievements he made in raising the spirit and belief of the national team players. Moments like 'turban-gate' in Wuhan - where India managed to succeed despite the insult to the star players' beliefs - prove that a head coach's job extends far beyond 28x15 meter square dimensions of a basketball court. For Flemming, raising Indian basketball from the grassroots and school level to the coaches and up to the national team was all part of the same job: and he did it all on and off the court. In behalf of the Indian hoops family, I wish him the best for all his future endevours!