This article was first published in the 144th edition (2015 - No. 5) of SLAM China magazine. Here is my original English version.

*I wrote this article before the playoffs began! 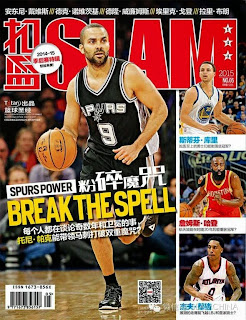 We have seen this movie before. Over and over again, Popovich’s disciplined and dedicated troops have stretched their dominance, squeezing the last bit of talent out of the Duncan-Ginobili-Parker ‘Big Three’, up to a point where we have entered the Kawhi Leonard era and a new face of the franchise threatens to haunt NBA rivals for another decade.

But this isn’t about the past or the future, it’s about the present. And in the present, all signs point towards another title for the Spurs, their sixth in the Duncan-Popovich era, and their first successful title defence.

There will be strong contenders on both coasts, but you can expect the Spurs to have an upper hand against every postseason challenger. The Warriors have been historically good this season on both ends of the floor, but I fear that that their inexperience (they were ousted in the First Round last year) will be exposed and they will be outclassed by the Spurs in the West. The East may present the Bulls, Cavaliers, or Hawks as the sacrificial lamb in the Finals, none of whom have the two-way balance, experience, and tactical cunning that the Spurs will be riding on.

After a relatively slow start to the regular season, Leonard, Parker, Duncan, Popovich, and co. have finished in style to peak just in time for the playoffs. The NBA is a problem, and the Spurs are the solution. With their team-first approach, passing, three-point prowess, and defensive intensity, the San Antonio Spurs will finish this season just as they began it: as NBA champions.