In a nine-day tournament of ups and downs, highs and lows, and surprises aplenty, the end result finally brought back some sense of predictability back to the Asian game. When the dust settled at the 5th FIBA Asia Cup in Wuhan China after the Final on Saturday, July 19th, reigning champions Iran - who are also the holders of the FIBA Asia Championship crown - finished at the top of the continental hoops bracket once more. After a few questionable early performances, Iran turned on their switch when necessary to blaze through the knockouts stage and defeat Chinese Taipei in the final. 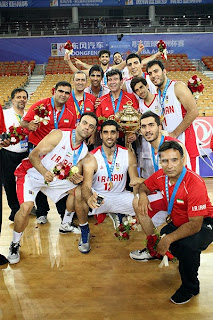 But from an Indian perspective, the tournament will go down in the annals of basketball history as a major turning point for the national team programme. Through the course of the tournament, India defeated powerhouses China, gave a scare to the continent's other top teams, and despite just a seventh place finish, displayed performances on court that are sure to earn them respect in major Asian tournaments in the future.

Behind the prowess of their giant superstar Hamed Haddadi - the most high-profile player at the tournament - Iran stepped up on the gas in the second half of a competitive final against Chinese Taipei. With the score tied at 42-42 at halftime, Taipei could not keep up their aggressive start in the second half of the game, and Haddadi (21 points) and Mohammad Jamshidi (20) helped Iran outclass their opponents en route to the 10 point victory.

Taipei were led by naturalized player Quincy Davis in the final, who finished with 19 points and 12 rebounds. Ying Chun-Chen added 16 for Taipei, who were playing in their first final in 50 years. 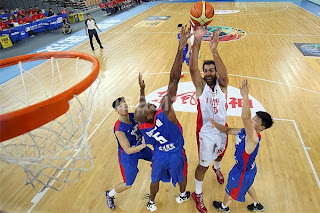 Haddadi, who averaged 13.6 points and 8.8 rebounds through the course of the tournament, was named MVP.

Philippines, who along with Iran will be one of Asia's two representatives at next year's FIBA World Cup, ended the tournament at third place by edging hosts China 80-79. Philippines relied on the leadership of Ranidel De Ocampo (18) in the victory, undoing a game-high scoring performance by China's Kelanbaike Makan (23).

Philippines had been defeated with easy a day earlier at the Semi-Finals stage of the tournament, 76-55, as Jamshidi (19) and Behnam Yakhchalidehkordi (18) showed no mercy to their south-east Asian opponents. In the other semi-final, Taipei shocked China for the second time in two years (after last year's FIBA Asia Championship) with an 83-74 win. China had no answer for the duo of Cheng Liu (22) and Ying-Chun Chen (16). Makan (22) and Hanlin Tao (17) were the leading scorers for China. 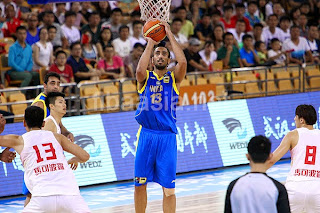 India were defeated in the Quarter-Final state by the Philippines. On paper, India's seventh-place finish of the nine teams was just as where it was expected to be: above Singapore and Indonesia but below the likes of Iran, Taipei, China, Philippines, Jordan, and Japan. Apart from China, there were no other upset victories for India. And yet, India's performances in Wuhan will always be remembered for their bravery and the passion under Head Coach Scott Flemming.

Before the tournament even began, Flemming had lamented India's lack of an exposure trip under their belts to give a team an idea and identity of having played together. Game 1 came up against Japan, and India's nervousness showed. India started off the tournament on the wrong foot as Japan headed to a blowout win, 75-52. Despite some stretches of good defense, India couldn’t defend Japan from the perimeter and committed too many turnovers throughout the course of the game.

India's opening game also sparked some controversy for FIBA: after coach Flemming had been given the understanding that his two Sikh players - Amjyot Singh and Amrit Pal Singh - could play with their turbans on (as they had always done in every tournament domestic or international in the past), FIBA surprisingly enacted their 'No Headgear' rule minutes before the game against Japan. The sudden implementation of the rule led both players to wait on the bench to remove their turbans and tie their hair back with bands. For the rest of the tournament, they played without their turbans. This decision has outraged the international Sikh community against FIBA since, and many have joined the #LetSikhsPlay twitter campaign to implore FIBA to change their rule. 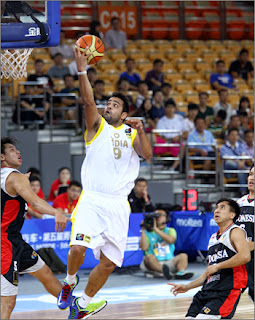 Meanwhile, Team India had a different worry: the very next night, they were set to face hosts and one of the tournament's favourites, China. But India had a surprise in store. Unfazed by the might and history of their opponents - whom India had never defeated in an international basketball matchup previously - India started the game confidently and held on to a surprising two point lead at halftime. China predictably improved after the halftime break and took a two point lead of their own. But the final quarter belonged to the Indians, who played inspired defense, held China to just eight points in the final period, and went on to celebrate a historic 65-58 victory. The win - which I've since dubbed the 'Wonder of Wuhan' - sparked a flurry of excitement among Indian basketball fans back home and kindled international attention on Team India more than ever before. From this moment on, Flemming's squad played with confidence and belief that they could match eye-to-eye versus any opponent.

Still basking in the after-glow of the previous day’s historic victory over China, India showed no mercy from the start in their next game against Indonesia, smothering their opponents en route to a 91-55 victory. India's captain Vishesh Bhriguvanshi was the leading scorer with 16 points, while Indonesia's Andika Ramadhani added 16, too. With two wins in Group A, India had ensured qualification to the Quarter-Final and established a strong defensive identity.

India had another positive start against Iran - the Asian champions - and once again held an early lead. But Iran chipped away, cutting India's advantage to just two points at halftime and then took complete control of the third quarter, eventually heading to a hard-fought 62-49 victory. Hadaddi had 16 points for Iran while Amjyot Singh answered back with 16 for India. Still, a better-than-expected performance in this last Group A game had India feeling confident going into the Quarter-Final. 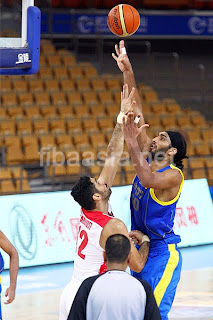 India started toe-to-toe with the much-favoured Philippines side in the Quarter-Final, but a strong second quarter performance by their opponents had India staring at a 12-point deficit at halftime. India sharpened the edges in the second half, and when they found themselves down 16 in the game's last five minutes, they made an inspired comeback, scoring the last 12 points of the game. Yet, their just wasn't enough time left on the clock and the Philippines survived for a 70-66 victory to book a place in the Semi-Final. Amrit Pal Singh had a monster line of 20 points and 10 rebounds in India's failed comeback effort.

India were now relegated to the 5-8th place bracket, where they faced Jordan in the first game. True to recent form, India proved tougher than expected for their opponents, who were ranked over 30 places higher than India in the FIBA World Rankings. India held on to a six point lead at halftime, but Jordan's offense finally broke through after the halftime break and Ahmed Al Dwairi exploded for a game high 21 points en route to Jordan's 69-65 win. Bhriguvanshi led India with 17.

India's last game at the tournament was a 7th/8th place playoff against Singapore. India used the game to vent out the frustration of their recent losses, bucking behind Amjyot Singh's scoreline of 30 points and seven rebounds to a 85-36 blowout victory. India's dominance was highlighted by a scintillating second quarter, where they outscored Singapore 23-3. 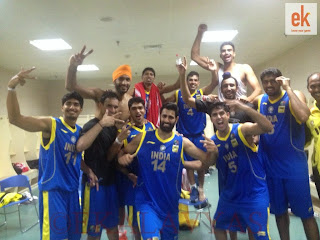 India will be leaving Wuhan encouraged and energized by their performances. Rarely in Indian basketball history had the team captured the attentions of the fans, and even in their losses they proved to be a serious opponent to worry about for Asia's finest. Despite not having any professional players or naturalized foreign talents, India's played at a high level, with top-notch defensive performances that truly earned them the respect of attending media, fans, and other opponents.

"We’ve made some strides," said Flemming of India's improvement, "We’re now a competitive team with the best teams in Asia. But I’m greedy, and if you get that close, why not win? But… I know, I’m pleased with them. Overall, we’ve made some strides. We’re a new team, and we’re a team everybody has to worry about now."

India can particularly feel confident about the maturing games of their two starting bigs - Amjyot and Amrit Pal - who were as good a tandem as any at the tournament on both ends of the floor. Amjyot led India in points (14.7 ppg), rebounds (6.9 rpg), and steals (1.7 spg). Guard and captain Vishesh Bhriguvanshi also proved to be a capable leader and became the spark for India from the backcourt, and he was the tournament's leading assist-getter for all teams (4.1 apg). Sharp-shooter Pratham Singh had important clutch moments to become one of India's heroes at Wuhan. The likes of Joginder Singh, Narendar Grewal, Rikin Pethani also stepped up at various moments for the Young Cagers. 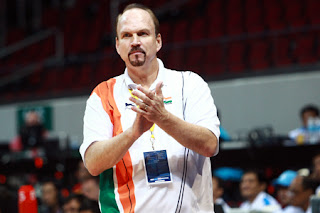 Flemming's team can now confidently look ahead and truly believe that can continue their recent momentum in future tournaments. Their next challenge will be an invitational tournament in Dubai, scheduled for early September. From September 20th, India could find themselves taking part in the basketball tournament at the 17th Asian Games in Incheon, Korea.

The future could be bright for Indian Basketball - now, hopefully, the federation back home can continue to focus on building the country's grassroots basketball structure to improve and identify top-level talent from the ground up and turn some of those close losses into victories. India performed wonders at Wuhan - let's hope that this wonderful run continues far into the future!