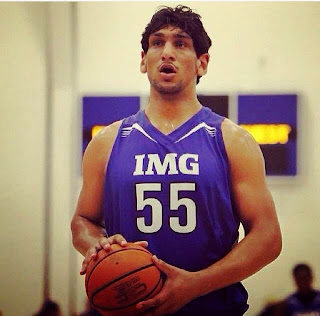 What do you get when you mix Satnam Singh Bhamara - the prospect dreaming of becoming India's first NBA player - and Hoopdarshan - the first Indian basketball podcast? Fireworks, of course! The 7-foot-2, 19-year-old giant Bhamara declared for the NBA draft last month and now hopes to become the first Indian player to make it to the league. On Episode 6 of Hoopdarshan, he joins hosts Kaushik Lakshman and Karan Madhok for an engaging discussion on the improvements he's made on the court over the past few years, his incredible journey from being the son of a Punjabi farmer to becoming an NBA prospect, his relationship with basketball in India, and going to his High School prom.

Born in the tiny Ballo Ke village in Punjab, Bhamara was scouted at age 14 (2010) by IMG Reliance and handed a scholarship to play at the IMG Basketball Academy in Florida, USA, where he has been for the past five years. Last month, Bhamara bypassed college to declare for the 2015 NBA Draft, as he hopes to become the first Indian citizen to play in the NBA. Bhamara has represented India at the international level several times over the past few years already and has been playing for the IMG team at the High School level in America. He is currently preparing for the draft with pre-draft workouts and visits to scouts at various interested NBA teams.