Over the past two years, American basketball coach Scott Flemming has already earned his way into the hearts of hoop fans in India as the Head Coach of the senior national Men's team. Under Flemming, the team has taken significant steps forward and shown improved performances in international tournaments such as the Lusofonia Games and the FIBA Asia Cup. 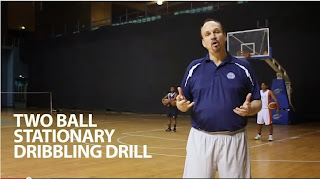 But Flemming's job responsibilities don't just end with the 12 men that represent India at the senior level internationally; as the national head coach, he is also invested in helping improve the grassroots talent of young players in the country and also pass on some of his coaching advice to aspiring Indian trainers and coaches, too.

Working with the Basketball Federation of India (BFI), Flemming is bringing a series of videos teaching individual player development drills such as dribbling, footwork, shooting, and more. As they are uploaded, the videos will be available from the BFI's official website. Flemming has also received assistance from senior and junior Indian national players to produce the content for the drills in the development videos.

The first of this video series was released a couple of days ago, with a focus on ball handling.

"There will be 4 different areas focused on this series of player development drills." Flemming told me recently, "These drills will be a resource for players to include in their regular workouts to improve their skills. They will also be a resource for coaches to use to specifically work with individuals or small groups to improve their fundamentals. There are no plays or team concepts here. They are designed for skill development. These are not only my drills but many of them are used by some of the top coaches in the world."

"I trust our coaches and players will incorporate them in their practices and workouts," he added, "This player development series will continue with a focus on offensive separation moves, shooting (perimeter and low post) and defense."

As Flemming mentioned in the introduction to the first video, these drills can be worked on many times by an individual or by players in small groups. And he stressed the key of being consistent with the drills and doing them regularly - every single day.

So, too all young Indian players with hoop dreams, here is a great place to start: you can get access to similar coaching tips that our nation's top players are learning in the comfort of your own home. Just make sure to stay persistent. As Coach Flemming said in the video: "Preparation creates confidence," and India could sure do with many more confident basketball players to become stars of the future.
Posted by KARAN MADHOK at 09:52