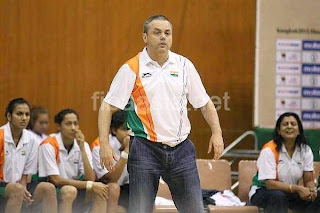 Before he leaves India after serving two years as the head coach of India's National Women's team, the Spaniard Francisco Garcia joins Hoopdarshan hosts Kaushik Lakshman and Karan Madhok for an entertaining conversation in Episode 5. Garcia discusses a variety of topics, including leading India to our best-ever FIBA Asia Championship performance, the attitudes of Indian women in the sport, his fractured relationship with the Basketball Federation of India, and the Spanish flamenco dance in 'Zindagi Na Milegi Dobara'.

Garcia was hired by the Basketball Federation of India (BFI) to be the Women's national team's head coach in June 2013 and 20 years of coaching experience in the past in Spain, Denmark, and Finland. enjoyed a relatively successful two year stretch, famously helping India finish at a best-ever fifth-place at the 2013 FIBA Asia Championship and helping a younger side to a bronze medal at the 2014 Lusofonia Games. Later in 2014, Garcia also coached the team to a 6th place finish at the Asian Games in Incheon. He has been active in taking his knowledge to the grassroots level, coaching players and other coaches at various events around the country over the last few years. His contract was not extended by the BFI and he will be leaving India by the end of May 2015.