A reputation - good or bad - is a hard thing to gain, and an even harder thing to lose. Rightly or wrongly, there are certain reputations that NBA fans attach to certain players and teams, and these reps end up sticking to the players (for better or worse) for the majority of their careers.

Kobe is clutch, Kobe is selfish. LeBron is a choker. Durant is a nice guy. The Spurs are boring. Gasol is soft. The Lakers are flashy.

But reputations, at best, are simply a lazy man's description of things that he may not have the time or the motivation to delve further into. It's easier to describe someone in one word than worry about all the details, even if, from a different angle, those details prove the reputation wrong.

For the better part of the past decade, I've been guilty of this several times with Dirk Nowitzki and the Mavericks, all up till the NBA Finals concluded this June. And this despite the fact that the Mavs have had their shares of success in this period: In 2011, the Mavs completed their 11th consecutive 50 win season. The only team to have had as much regular season success as them in this period have been the Spurs. But the difference between the Spurs and the Mavs was that, in the last 12 seasons, the Spurs had won four NBA Championships. The Mavs had finished with the NBA's best record, even entered the Finals, but never won a ring to show for it.

During this period, they had some great highs, but what was worse was the spectacular falls. These included losing the NBA Finals to Miami in 2006 after being up 2-0, losing in the first round to the bottom-seeded Warriors after finishing with the best record in the league in 2007, and in 2010, despite being the number two seed, they lost in the first round to the seventh-seeded Spurs.

The reputation so far: The Mavericks are a great regular season team, and will be trouble for anyone facing them in the playoffs, but don't place your championship bets on them anytime soon.

And then there was their leader, Dirk Nowitzki. One of the best scorers that the NBA has ever seen, Dirk's rise and fall matched that of his squad. He got the credit for their regular season successes and their few long playoff runs, but he also got the blame for their lack in mental strength, their shattering playoff defeats and upsets. Before the 2010-11 season, Nowitzki had an All Star nine times, named to the All NBA first team four times, in the second team five times, and won the regular season MVP in 2007. Meanwhile, he became the franchise's greatest ever scorer, and became one of the most unstoppable scorers in NBA history.

But Dirk was not considered to be tough enough, mentally and physically, for the 'hardcore' NBA Playoffs. Despite being part of a balanced franchise with numerous supporting players over the past decade, he could never get it done.

(*Sidenote: At various points in the past 11 years, the Mavs have fielded some of the NBA's most deepest squad besides Dirk, including Steve Nash, Michael Finley, Antawn Jamison, Antoine Walker, Nick Van Exel, Josh Howard, leading up to his supporting cast today of Jason Terry, Carol Butler, Shaun Marion, Jason Kidd, and Tyson Chandler) 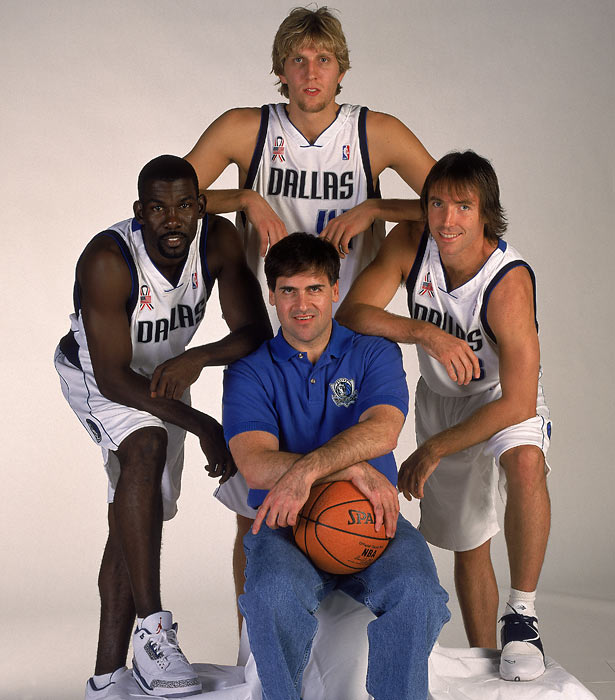 Dirk though, did earn my respect during this period in one extremely important way: along with Kobe Bryant, Tim Duncan, and Paul Pierce, he was amongst the NBA's only superstars to have spent such a long time with only one team. The 2010-11 season was Dirk's 13th with the Mavs. He was the one true symbol of a young franchise with little notable history before the Nowitzki era. Think of it as what the Cavs would've had, if a certain Decision hadn't been made.

Now let's get to this year: It had been another ho-hum great 50-win season for the Mavs. They had finished with a 57-25 record, their best since 2007. Nowitzki finished the season averaging solid if unspectacular 23 points and 7 rebounds a game. This was his lowest scoring average since 2004, but an ageing Dirk improved his efficiency dramatically, posting up the highest field-goal percentage (0.517) of his career. With the Mavs finishing at 3rd place in the West, all signs pointed towards another probably second-round finish while the Lakers/Heat/Bulls/Spurs/Celtics stood above the rest of the field as the real title challengers.

The second round, and once again, I bet against Dirk's squad. This time I had a valid reason though: the Mavericks were facing two-time reigning champs the Lakers, with the Lakers holding on to the home court advantage. But it was the Mavs, not the Lakers, who showed the late game mettle, toughness, and surprising poise in clutch situations. The Mavs won both games in LA, and then won both games back home in an amazing sweep of the reigning champs. Most people may talk about their Finals triumph, but in my eyes, beating the Lakers in four games was their highest moment in the season. Dirk was completely unguardable, and his dominance of Pau Gasol made the latter shrink into a shell and dent his own reputation.

Okay, okay, on to the Conference Finals, and I thought: this has to be it, right? The Mavs aren't for real, are they? I'm gonna go ahead and pick the young and spunky Thunder to defeat them. Wrong again! Dirk Nowitzki had a historic Game 1, scoring 48 points off of just 15 shots, making all 24 of his free throws on the way for a win. Nowitzki averaged 32 ppg over the series, making the Thunder look like the inexperienced young pups that they were. It took just five games, and the Mavs were back as Western Conference champs and back into the Finals. What made the last two series more amazing for the Mavericks was that, at several times, they found themselves in a deep hole, and every time, they used a massive run, usually ignited by Nowitzki to make a comeback and win the game. It was as if the tables had turned with this team, and their rep was changing before our very eyes: long considered to be the overrated ones likely to collapse, they were now becoming the underrated ones likely to achieve the improbable.

Hindsight is an easy thing: looking back now, I realise how amazing Nowitzki and the Mavericks were in the run to the finals, but of course, I saved giving them the credit they deserved until the very end.

The very end to this 'RiDirkulous' summer came in the NBA Finals versus the Miami Heat, a rematch over Dwyane Wade to 2006 that Nowitzki may have personally cherished. But this was a different, much stronger, more LeBron-ed Miami team. And it was also a mentally stronger Mavericks side. 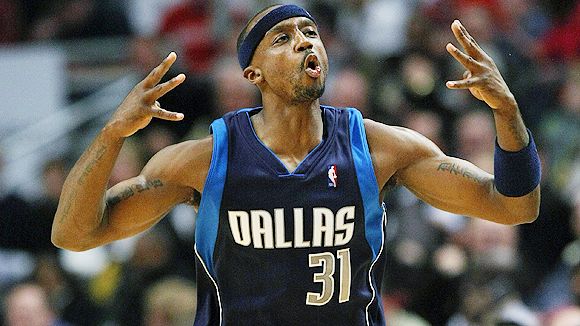 Looking at Nowitzki's individual playoff success again, I realise now that he had been gifted in his team with just the right team-mates to fulfill the exact shortcomings that he was known to suffer from. Can't play post-defense or rebound too well? Bring in Tyson Chandler. Can't play perimeter-defense too well? Bring in Shaun Marion and DeShawn Stevenson. A problem with ball handling and leadership? That's what Jason Kidd is there for. Is his emotional toughness in doubt? No one tougher in the side than Jason Terry. And this group of players surrounding Nowitzki had one other advantage: they all knew their roles and they stuck to it.

In this fashion, Nowitzki became a rare superstar to win a championship without at least one more all star in his side. In recent years, most of the championship winning teams had at least two (going backwards in time): the Lakers twice (Kobe and Pau), Celtics (Garnett, Allen, Pearce), Spurs (Duncan, Ginobili), Heat (Wade, Shaq), and the Spurs (Duncan, Ginobili). In 2004, it was the amazing Detroit Pistons who won the championship with just one current all star player, Ben Wallace.

Despite their depth, the Mavs weren't supposed to be favourites in the Finals either, mainly because they were going against the hyped LeBron-Wade-Bosh trinity. 7 and half quarters into the series, with the Heat leading 1-0 at home and threatening to go 2-0, it seemed that the fairytale for the Mavs was over. But Terry, Nowitzki, and the rest of the squad sparked an incredible Game 2 comeback, capped off by Nowitzki's game-winning lay-up over Bosh, to equal the series and remind everyone that they're still pretty tough. Heat won the third game behind another great Wade performance, but nothing was going to stop Nowitzki and the balanced Mavericks from there onwards. They won the next three to win the series 4-2 and win their first ever NBA title.

Hindsight, I repeat, is an easy thing. All of a sudden, we started looking back at Nowitzki as he really was the next coming of Larry Bird, possessing the most deadly mid-range jump shot in the league and the heart of a true champion. We started looking at the Mavericks as a team that never-says-die. It was incredible to say it, but then again, seeing their history, it wasn't: Dallas Mavericks, NBA Champions. Dirk Nowitzki, Finals MVP.

Despite his below-average regular season, Nowitzki truly elevated his game in the playoffs, averaging 27.7 ppg and 8.1 rpg over the course of the 21 games. He may not have the same pure talent he had back in 2006-07, but in the midst of his run he played the most inspired, efficient, and tough basketball of his career: hitting big shots, grabbing big rebounds, showing up as a true leader, and never backing down to anyone.

It's a pity that most casual fans will look back at the Finals as LeBron's Collapse Part II. True, LeBron James and the Heat fell, but more importantly, Dirk Nowitzki and the Mavs rose.

Yes, reputations are a difficult thing to earn, and a difficult thing to change. With one incredible summer, Nowitzki's reputation has definitely changed in my eyes. I look at him now as a winner and a leader that he has been for several years but couldn't prove it. Funny, how a championship changes perspective like that.

What's funnier is that, the man Nowitzki defeated in the Finals, LeBron James, finds himself in the same boat Nowitzki did for all these years. Despite incredible individual and team success, Nowitzki couldn't shake the championship monkey off his back, and when he finally did, the glory was unmatchable. Will LeBron's brilliant-but-maligned career follow the same route?
Posted by KARAN MADHOK at 13:40