Shining with the help of some home town advantage, the squad’s from Southern Railway and IOB (Chennai) won the Women’s and Men’s trophy respectively at the 3rd Jeppiaar All India Invitational Basketball Tournament in Chennai. Southern Railway defeated South East Central Railway (SECR) in the Women’s final on Thursday to win the championship, while IOB lifted the title after beating ONGC in a closely contested Men’s final on Friday evening at JJ Indoor Stadium.

Only in the third year since its inception, the Jeppiaar Tournament in Chennai has gained a reputation as one of the most exciting and competitive basketball championships in India, featuring some of the best club sides from across the country. The tournament, which was held from October 9-14th this year, also plays as a fitting precursor to the Senior National Basketball Championship which will be taking place in Chennai in two months.

The tournament was organised by the Jeppiaar Institute of Technology, Sriperumpudur.

The Woman’s championship featured four teams: Southern Railway, SECR, Billai Steel Plant, and Central Railway. Southern Railway had an exceptional tournament, as they won all three of their round robin games before entering the final versus SECR. After a closely-contested first quarter, the result of this final also soon became a foregone conclusion as SECR had no answers for Southern Railway’s three-pronged attack of Anitha Paul Durai, Geethu Anna Jose, and Kokila S.

Anitha was the best player in the final, leading the way with 31 points as Southern Railway won easily, 89-40. Kokila S. was rewarded for her consistent play and named as the player of the tournament in the woman’s section. 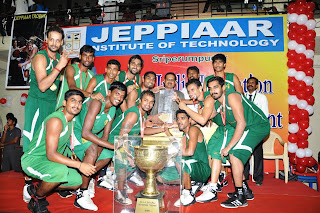 The Men’s final saw two experienced sides, IOB and ONGC, face off against each other in a classic encounter. The game was close throughout, with IOB leading by two at the end of the first quarter and ONGC leading by three at the end of the second. IOB began to improve their game in the third period and slowly stretch the lead in this tough, defensive match-up. By the end of the game, ONGC found it hard to close the gap as IOB won 55-48 to lift the Jeppiaar trophy for the first time.