(This is an international game, played by the mind, not with anger). 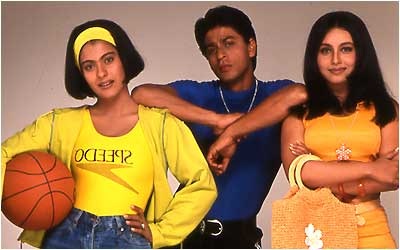 The wise words above were first spoken by Indian movie superstar Hrithik Roshan as he faced Aishwarya Rai in a 1-on-1 basketball game / flirting session in the film Dhoom 2. Now, I'm sure that the Zen Master aka Phil Jackson would've been very proud of Roshan's 'Zen' advice, but this isn't the only classic moment of Basketball in Bollywood. The Indian film industry, the largest in the world, may not have produced hoop-related classics such as He Got Game, Hoosiers, Rebound, White Men Can't Jump, Space Jam, The Fish That Saved Pittsburgh, Above The Rim, Basketball Diaries, and etc, etc, etc...

But, inspired by this article by Sportskeeda's Dibyasundar Nayak on the Top 5 Bollywood Movies on Sports (the list included cricket, hockey, football, and cycling), I decided that it was time to reveal to you some great basketball scenes from Hindi movies. Yes, there have been rumours circulating off and on for nearly a year about '4 PM on the Court', India's first basketball movie, but until this film is released, we have to make do with the limited amount of Bollywood Hoops action we have.

So, without further ado, I would like to present to you the Top 3 Great Moments of Bollywood & Basketball. I have embedded the videos, and below them, added my detailed comments. All three of the movies mentioned below were superhits, which can only lead me to conclude that Basketball + Bollywood = gold.

Dhoom 2 wasn't Roshan's first stint with basketball: that moment belonged to the movie Koi Mil Gaya. Although I haven't had the heart or the motivation to sit through the entire film, I can guess that the story-line was a cross of ET, Forrest Gump, and in the basketball sequence, Space Jam. Basically: Rohit (Hrithik Roshan), a full-grown man of limited intellect, finds an alien called 'Jadoo' who helps him get achieve supernatural things. In this classic 9-minute scene, Roshan's team - the 'Paandavs' - which include him and four children, play a game of basketball for the 'Hero Cup' against the mean-looking 'Kasauli Tigers'. My running notes are below the video:

- There is something about the skin-tight vests on everybody.
- Paandavs have sneaked in the alien 'Jadoo' on to their sideline.
- Good touch in naming the team Paandavs, by the way. The Mahabharat's 5 brothers, five guys on the court.
- Jadoo has given Roshan some ill dribbling skills... Leads me to believe that Allen Iverson may have also had close encounters of the third kind. 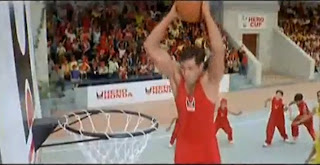 - Oh man! Hrithik goes FAAAR above the basket for that 2-handed dunk. His WAIST is aligned with the basket there.
- I know Hrithik's the best player but dammmn he's being selfish out there. This is like Kobe in 2006. Who's Kwame?
- At 1:49 - NBA goaltend, probably legal by FIBA and thus India rules though.
- Good call by the Tigers to FINALLY quintiple team Rohit aka Hrithik.
- HAHAHAHAH 2:20 the Tigers player Freddie Weis'd the little Sardar kid... HAHAHAHAHAH
- Bruce Bowen would be a good fit with the Tigers, specially after 2:50.
- After 3 minute mark.... the kids are jumping but can't release the ball. No travelling call REF!!! What is this? A bunch of LeBrons playing here?
- That's a whole lotta dunks in this game. Now I wanna see Blake Griffin suit up for the Tigers.
- Halftime at 4:09 after a 49-0 tigers run (DAMN!).
- 4:38: AAAh so that explains the shooting slump for the Pandavs. Jadoo cant help them cheat if the sun isn't out.
- And so Roshan prayes to God for sunlight... Obviously no matter how great the Jadoo-led Pandavs become, they will never do well in the NBA indoor stadiums.
- 5:30 onwards... All I can say is DAMMMN!!!!!!
- And now, the Pandavs, who are taking Jordan's 'Air-time' concept to another level, are introducing you to the new unstoppable No-gravity offense.
- 6:56-7:05: Roshan with perhaps the greatest move EVER? He gets the ball at his own free throw line, flies and bounces to dribble once at the halfcourt (this bounce may have been repeated here to show its full awesomeness) and then dunks it in.
- Paadavs have responded with their own 42-0 run to make it 48-49
- Ref didn't call a single shooting foul all game by the way. Good clean fun, this.
- I'm sorry, I take back what i said a minute ago. 7:58 - 8:09 is the greatest move ever. Hrithik intercepts a shot, jumps, does three body flips in mid air to land his feet on top of the oppositions rim, and then drop the game winner. Incredible.
- Not fair, Paandavs cheated and had the alien with them. We need the Tigers to get some assistance. I suggest have Donague bet on them and then officiate the game.
- Cheater Paandavs won the Hero Cup.

And now we arrive to this famous scene in Dhoom 2 that I mentioned earlier: Aishwarya Rai Bachan vs. Hrithik Roshan 1-on-1, a scene vying to be the greatest movie 1-on-1 battle since Ray Allen (Jesus Shuttlesworth) vs. Denzel Washington in He Got Game... Again, this is a movie that I haven't seen in its entirety, but the plot is something about international criminals, most of whom are sexy. In this scene, Rai and Roshan play against each other in the dark, in the rain (for the love of the game, I presume).

- I would also like to mention here that Aishwarya Rai (aka Sunhari) will refer to herself in third-person during the entire duration of this clip.
- Take note boys: If you dribble the basketball in slow motion in the rain, Aishwarya Rai will stare at you.
- Both in Koi Mil Gaya and in this one, Roshan has stayed surprisingly consistent to his basketball-playing gear, which has included a tight vest and trousers. This time though he has a bandana on, which means that he is badass.
- Also to further emphasize that basketball is hip, the director would like you to hear people rapping.
- 0:47: "Hey... Are you like, Checking me out?"
- 1:20: Time to play. Aish strips down to her mini-skirt. Recently, FIBA controversially discussed the idea of more revealing uniforms to sex up the women's game: Aishwarya Rai here is Exhibit A. 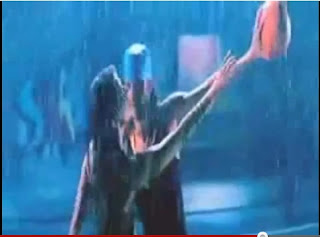 - Ok so it's ON!
- Roshan and Aish have their own modified version of flirtatious trash talk that Gary Payton may or may not approve of.
- 2:48: That's a carry Roshan, seriously. I'm serious about him getting as many travel calls as LeBron.
- By the way, Hrithik Roshan doesn't shoot the ball at the basket, he throws it, kind of like I did when I was 8.
- 3:06-3:12: Aish displaying her back to the basket skills.
- 3:20-3:23: Woah, what? Travelling, Aish.
- Roshan can ball but obviously need 'Jadoo' to dunk.
- 4:10-4:20: Some sick handling skills by Roshan, sort of.
- Roshan: "Yeh International game hai - Deemag is khela jata hai, gussey sey nahi". Someone teach him the Triangle Offense already, he already has the attitude!
- If you haven't gotten it yet, they aren't talking about basketball, they're talking about crime. Which is also an international game, played by the mind, not with anger, apparently.
- 5:46: Money shot!

Aah.. We're now at the main event. This one movie single-handedly turned a whole legion of young Indians to take basketball a little more seriously. Kuch Kuch Hota Hai is one of India's greatest romantic classics, and this particular scene features a basketball game between two former friends who find and love each other later in their lives. This is the only movie of the three featured here that I have seen fully. So it's Shah Rukh Khan, one of India's biggest stars ever as Rahul vs. Kajol (Anjali). When they were in college, they were best friends, and she used to kick his ass. Now, they have a frosty relationship, but maybe hoops are going to bring them closer together. Let the love and basketball resume.

- I'm getting a flashback. The two kids are actually pretending to fight to make the two main characters play ball again and thus, eventually become close again.
- The debate within the kids and the adults here is: Can girls play ball? I think we're about to find out.
- 1:13-16 Kajol challenges him - it's ON!
- 1:50: And they're FINALLY on the court. I guess it's going to be a full-court 1-on-1. Although this looks like a small court.
- Yes, before you ask, Shah Rukh is going to keep his tie on.
- And yes, Kajol is playing in a Sari and barefoot. Man, I wonder what David Stern and the NBA's strict dress code regulations have to say about this.
- 2:10-2:15: Flirtatious trash talk during basketball is obviously something us Indians are great at.
- There is obviously no one to referee in this game, and Shah Rukh is being allowed to commit multiple violations in each possession.
- 3:20: Kajol steals the ball, but then has to fix her sari before the jump-shop. #IndiaBasketball 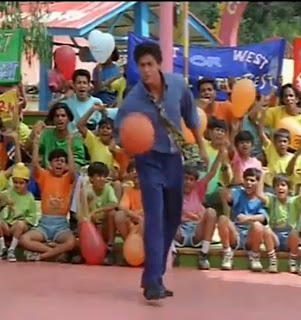 - Are they both shooting at the same basket. Wtf?
- 3:33-3:36 Oh no he didn't. If Ginobili was Kajol in a Sari, he would've flopped at that gentle touch of the waist and won the foul right there.
- 3:58: Shah Rukh Khan has clearly learnt dribbling from the finest.
- 4:03: DAMN she tripped him! REFF!!!! That's a potentially career-ending type of foul. Andrew Bynum would be proud.
- 4:40 onwards: Hahahah... So this part is, basically, "Let's all mock the Loser Girl while she stands sadly in the middle of the court."
- Of course, it all ends up all well and good, and hoops makes them friends again.

Moral of the story: Basketball in Bollywood, Bringing People Together. And ensuring blockbuster movies.
Posted by KARAN MADHOK at 11:45