It was double success for India’s 3-on-3 (3x3) basketball teams at the 1st South Asian Beach Games (SABG) in Hambantota, Sri Lanka, on Tuesday, as both the Indian Men and Women won the gold medal after defeating Sri Lanka and Maldives in their respective finals. Both of India’s basketball squads finished the three-day competition undefeated, with 4-0 records. 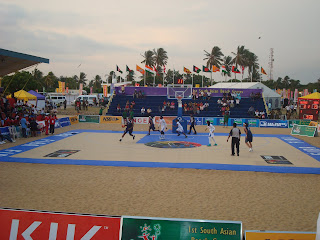 Although real Beach Basketball is played on sand, the competition at the SABG showcased an outdoor version of the 3x3 basketball format, a modified version of the game which is played in the half-court. Each team is allowed just three players on the court and the 10-minute game can only go up to a maximum of 21 points.

In the Men’s final, Sri Lanka took a confident start, but India quickly fought back and held on to a three point lead at halftime. Behind eight points by Jagdeep Singh, India extended their lead to clinch the win, 21-16.

Earlier, on Sunday and Monday, India’s Men’s side had won all three of their group games, defeating Maldives, Bhutan, and Sri Lanka.

India also dominated the women’s final, defeating Maldives by 17-7 on Tuesday evening. India’s Women’s side had also won all their earlier games on the previous two days, defeating Nepal, Maldives and Sri Lanka.