It is a rare occurrence when both the boys' and girls' teams of the same state in India peak at the same time, but that was exactly the case with three states - Tamil Nadu, Kerala, and Uttar Pradesh - over the past week in Hassan (Karnataka). All three states finished in the top three in both divisions at India's largest under-16 hoops meet, the 33rd Youth National Basketball Championship for Boys and Girls. The tournament concluded with the finals on Saturday, November 26th, as Tamil Nadu (Girls) and Kerala (Boys) won the last games of the week and emerged as champions at the city's Hasanamba Indoor Stadium 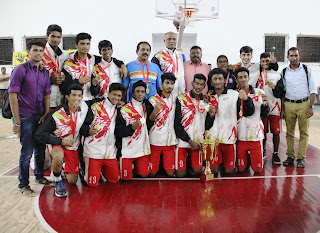 Organised by the Karnataka State Basketball Association (KSBBA) under the auspices of the BFI, the 2016 Youth Nationals featured 24 boys teams and 22 girls teams in the eight day tournament. Last year's washout had led the BFI to declare all the finalists as champions, so both the boys' and girls' divisions had two reigning champions each: Tamil Nadu and Delhi (Boys) and Tamil Nadu and Chhattisgarh (Girls).

This year, Tamil Nadu's Girls had an opportunity for sole ownership of the winner's trophy when they faced Kerala in the final. The only two undefeated teams thus far, Kerala and TN went toe to toe for the first two quarters of the game, and Kerala held on to a slim, 37-35 lead at halftime. TN turned things around drastically after the break, and took over the game: dominant efforts by Avanthi Vardhan (17) and S Pushpa (17) helped TN take a lead and stretch it to double digits, eventually to an impressive 82-66 victory. Shreekala R scored a game-high 27 to pace Kerala's efforts.

Kerala had better luck in the boys' final against Uttar Pradesh, where they turned a slow start into a dominant, blowout win. UP led 18-16 at the end of the first quarter, but it was all Kerala after that. Amal Reghu exploded for 33 points while Chacko C Simon (19) and Sejin Mathew (16) made valuable contributions to help Kerala win 85-51. UP's duo of Priyanshu and Bhagyansh Gulati scored 21 each, but they lot little offensive contribution from the rest of their squad in the loss. 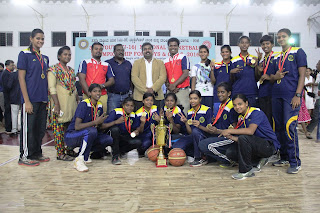 Uttar Pradesh will go home happy, however, because in addition to securing silver in the boys' tournament, they won a bronze medal earlier on Saturday when their girls' team - led by the unstoppable Vaishnavi Yadav - blew out Madhya Pradesh 71-39. Yadav, a rising basketball star from the state, scored 39, matching MP's entire box score! Divyani Gangwal had 22 for MP. The boys' bronze medal game also was not a particularly close affair. After a high-scoring, tight first quarter (26-26), Tamil Nadu revved up their engines with the help of their duo M Arvind Kumar (30) and K Surya (23) to win 99-69. The Tomar brothers - Pratyanshu (22) and Prashant (16) - led the way for the hosts Karnataka.

The top three teams in both sections awarded cash prizes of Rs 75,000/-, Rs 50,000/- and Rs 25,000/- respectively. Numerous Karnataka State Ministers and Kannada actor/former MP Ramya (Divya Spandana) were present in the final. Karnataka's U18 girls' team - winners of the 2016 Junior Nationals in Puducherry - were felicitated. 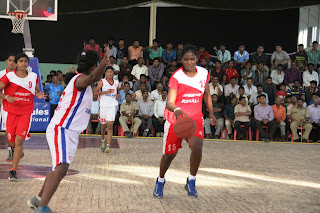