Review: Greg Pearson's "Maybe Next Year" is for the sports optimist in all of us


At first, it seemed like an arbitrary decision. I liked the colours on Patrick Ewing's jersey on his old basketball card. I became enamoured with Allan Houston's baseline fadeway, Latrell Sprewell's cornrows, and Marcus Camby's tattoos. I saw a team carry out a series of upsets in 1999 to become the first eighth seed to ever make the NBA Finals. And, sitting in India thousands of kilometers away from New York, I decided to myself, "Okay, this is my team. Now, I like the New York Knicks." 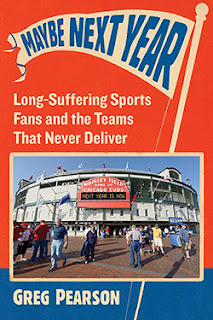 Over the next few years, the surprise and elation of 1999 would turn into suffering and embarrassment, but, in a perverse fashion of strange self-misery, my liking of this team turned into love. I loved the Knicks even during the Tim Thomas - Keith Van Horn era, loved them when they traded for Stephon Marbury (my first NBA jersey!) and tried to make the Eddy Curry - Zach Randolph duo work. I cringed, but continued to love them even as Isaiah Thomas committed errors and sins, as the team sunk to bottom-status depths, and found small pleasures in the David Lee 'era'. I was boosted when the team signed Amar'e, elated when they got Carmelo Anthony, and downright ecstatic with Linstanity happened. I raised a sceptical eyebrow when Phil Jackson made Kristaps Porzingis the fourth pick and turned into a unicorn worshippers soon after the greatness of Lord Zingis Khan was understood. And throughout a 17-year period of playoff disappointments and ugly records, I continued to rock the blue-orange-white. The pain, I believed - that I still believe - makes the pleasure all the more worth it.

What seemed like an arbitrary decision has become a defining characteristic. My personality as an adult is permanently dyed with that blue, orange, and white. I've visited New York only a few times in my life, watched just one game at the Mecca of the Madison Square Garden, and yet, I feel worthy to celebrate the Knicks' history, cheer with every big win, and throw my hands up in frustration at every moment of sorrow. There is a sense of optimism in this type of irrational fandom, a hope that, if the present is bad, maybe the future will be better. Knicks have only won two NBA titles, both in the early 1970s, a decade or more before I was even born. And after every wasted season, I think to myself, well, hell, at least there's next years!

I divide sports fans into two distinct brackets, and the bracket they fall in go on to define their higher philosophy in life: the pursuit of success versus the pursuit of loyalty. There are sports fans who are promiscuous with their fandom, following success wherever it may lead them. And then there are those who stay faithful to one life, through its bitter pains and occasional joys, following one team no matter where it leads them. 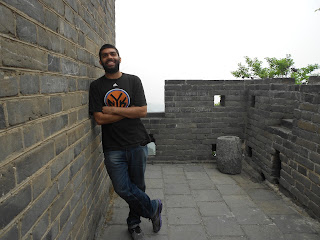 In the newly-published book Maybe Next Year (McFarland, 2016), newspaper writer and editor Greg Pearson profiles the fans of the latter category in various North American sports, both professional and collegiate, to discover a thread of optimism that somehow keeps them going and keeps their spirits high, even during the worst of times. The book features more than 100 loyal followers of 23 teams, who explain their reasons for never giving up. One of those followers featured, in a New York State of Mind, is me!

Pearson's guidelines for choosing his fans was simple: he focused on teams that hadn't won a championship for forty or more years, covering a couple of generations of shared grief, often passed down from parents to children. Some of the memorable fanbases featured include the Detroit Lions, the New York Jets, the Philadelphia Eagles, and the Cleveland Browns. In the basketball world, fanbases of the Phoenix Suns, Denver Nuggets, Atlanta Hawks, and New York Knicks talked about their years of pain and optimism. Pearson also included the Sacramento Kings, who moved to the city 31 years ago but were saved from relocation through fan efforts and a purchase by Indian-born owner Vivek Ranadive in 2013.

The most pertinent chapter in the book is the first, which features on the Chicago Cubs, who hadn't won an MLB World Series since 1908. The Cubs serve as the book's opening, and perhaps, also its happy conclusion. The night before Maybe Next Year arrived at my doorstep, they defeated the Cleveland Indians in the 2016 World Series and broke a 108-year title drought!

Reading through Maybe Next Year was therapeutic in a way. It made me realise that I am not alone: us loyal fans keep going through the ups and downs (mostly downs), no matter what the result. So the next time you jump on the bandwagon of the 73-9, Curry-Durant Warriors, tip a hat to those hardcore Warriors fans who lived through 40-years of near-misses, of Run-TMC, Chris Webber, Jason Richardson, the "We Believe" team, and Baron Davis. After decades of irrelevance, they found their year in 2015. The Cubs waited over a century for 2016. Perhaps, one day, our favourite teams will have their year, too.