Last September, heavy rainfall and controversy behind the organization marred India's premier national U16 basketball tournament - the Youth Nationals - in Bhavnagar, Gujarat. Now, over a year later, the tournament is back, a little later in the year, heading further south to Karnataka, and with hopes from the Basketball Federation of India (BFI) to purge the memories of the past and launch the new, young stars of Indian basketball. 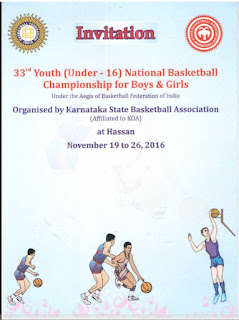 The 33rd Youth National Basketball Championship for Boys and Girls is set to tip off in the city of Hassan in Karnataka on Saturday, November 19th. Organised by the Karnataka State Basketball Association (KSBBA) under the auspices of the BFI, 2016 Youth Nationals will feature 24 boys teams and 22 girls teams are in the eight day tournament. Last year's washout led the BFI to declare all the finalists as champions, so both the boys' and girls' divisions will be competed for between two reigning champions each: Tamil Nadu and Delhi (Boys) and Tamil Nadu and Chhattisgarh (Girls).

In a KSBBA press conference at the Century Club in Bengaluru on Wednesday, the BFI President and KSBBA secretary K Govindraj announced the tournament which will include, as usual, accommodation and catering for over eight hundred players, coaches, referees, officials, and invitees to the event. The matches will be conducted at three venues - the indoor and outdoor courts of the Hasanamba Stadium and the courts of the Malnad College of Engineering. 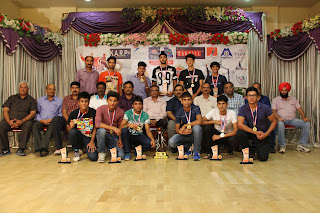 The inauguration ceremony for the 2016 Youth Nationals is scheduled to start at 4:15 PM on Saturday at the Hasanamba Stadium in Hassan. A Manju, the Minister for Animal Husbandry and Sericulture and also District In-Charge of Hassan and Pramod Madhwaraj, Minister of Fisheries and Karnataka's Dept. of Youth Empowerment and Sports, will be the chief guests at the event.
Posted by KARAN MADHOK at 05:36