The 32nd Youth National Basketball Championship for Boys and Girls in Bhavnagar (Gujarat) began under the unkind threat of rain last week. And by the time the tournament - featuring India's finest under-16 basketball players - concluded on Monday, September 21, the rain remained the only thing undefeated.

Heavy rainfall washed out the boys and girls Finals the games at the MK Bhavnagar University on Monday, leaving the Basketball Federation of India's (BFI) Technical Commission with no choice but to cancel all the contests and declare all participants 'winners'. Tamil Nadu and Delhi shared the gold medal in the boys' category while Tamil Nadu and Chhattisgarh were declared champions in the girls' section.

It isn't a surprise that the tailend of the monsoon season provides heavy rainfall in various parts of the country, including Gujarat. But what is a shock is that the tournament's organizers did not have an indoor venue to conduct the games. In recent years, all of the national BFI tournaments have been conducted at indoor courts, with only a few games at an alternative outdoor venue. But the Youth Nationals - the first national conducted by the new BFI executive committee - was an exception, as all the games were held on outdoor courts, despite the threat of unfriendly weather.

The BFI split into two opposing committees earlier this year, with each questioning the legality of the other in an ongoing off-court battle. But Team Govindraj - the BFI faction behind the organization of the 32nd Youth Nationals - have held firm of their stand atop the federation and continued to hold events in India and abroad as normal. 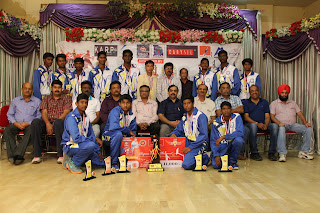 Tamil Nadu did a double in both boys and girls category at the Youth Nationals last year and were looking to repeat the feat this time around. However, they have had to settle for sharing the title with Delhi and Chhattisgarh in the boys' and girls' section respectively.

P. Baladhaneshwar from Tamil Nadu was named as the boys’ MVP for the tournament. This is his second MVP trophy in two years at the Youth National Basketball Championship. For the girls, Chhattisgarh’s Gulabsha Ali was named MVP. 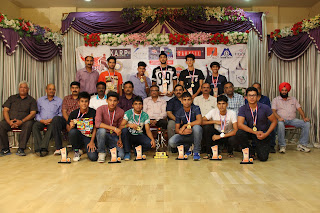 A day earlier, the Semi-Finals had given basketball fans a little more reason to cheer. In the Girls' section, Chhattisgarh's rising new talent Gulabsha Ali scored 24 points to help her side defeat Maharashtra to enter the Final. After a close first quarter, a 22-9 run by Chhattisgarh in the second quarter sealed the deal, and Chhattisgarh never looked back. The second girls' semi-final between TN and Punjab got off to a low-scoring start, with Punjab leading 16-15 at halftime. But scoring - chiefly from TN's end - got into a higher gear after the halftime break, and TN finished the final two quarters clinically to win 52-39. Punjab's Sakshi had 18 in a losing effort.

The boys' semi final between TN and Haryana saw several exceptional individual performances, including TN's duo of P. Baladhaneshwar (23) and GK Manikandan (20) and Haryana's Rinku (22). But it was TN who kept their command of the game most of the way, and were untroubled except a late run by Haryana. TN won 72-62. In the second boys' semi-final, Delhi started the first quarter against Punjab in ruthless fashion, putting forward a 24-4 to take away all hope from their opponents. The rest of the game was a cruise for Delhi en route to a 67-47 win. Manik (21), Hansraj (19), and Sourav (17) were the top scorers for Delhi, while Abhi Kumar scored 22 for Punjab in a losing effort. 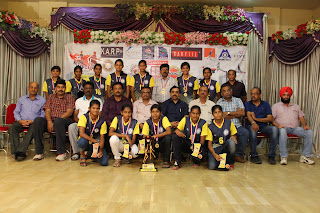