Whether he is enjoying success or disappointments, having ups or downs, there is one clear certainty of India's basketball star Amjyot Singh: he isn't going to stop. Amjyot has been involved in a never-ending cycle of hoops, from playing professionally in Japan's D-League, to leading India to big international wins, to starring in FIBA 3x3 roles both in Japan first and then at the 3x3 World Tour in UAE, and up to declaring for the NBA's D-League draft. After a steady stream of progress, the last of those ambitions - the D-League - didn't prove fruitful this year. But Amjyot's response, as always, is to continue ballin'.

A few weeks after the disappointment of NBA D-League draft night, Amjyot is back on the court, back with his teammates of Tokyo's 'Team Hamamatsu' to take part in the final FIBA 3x3 event of the calendar year. Amjyot and his squad finished second in the 3x3 World Tour last month, and his superstar performances have now carried him and his team to the FIBA 3x3 All Stars in Doha (Qatar), starting on Friday, November 18.

There will be 8 teams participating in a direct knockout contest at the 3x3 All Stars event.

After his performances in UAE, Amjyot was named as the highest ranked 3×3 player in the "Rest of the world" category. His Team Hamamatsu are a team rich with Indian-origin talent, also featuring Inderbir Singh Gill (USA), Bikramjit Gill (Canada), along with Japan's Chihiro Ikeda. 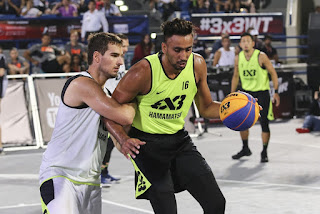 Hamamatsu has been seeded 4th and will face hosts Team Doha in the opening quarterfinal game on 18th Nov, from 8:30 pm IST.
Posted by KARAN MADHOK at 22:09