Chinese youth players remain the queens of Asian basketball, as for the third consecutive time they have brushed past Japan in the final to win the continent's premier U18 tournament. With an impressive victory at the finale on Sunday, November 20, China were once again crowned champions of the FIBA Asia U18 Championship for Women, held from November 13-20 in Bangkok (Thailand). 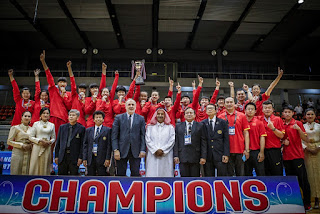 Meanwhile, it was a terribly unsuccessful and disappointing tournament for India, who lost all of their Level I games and then lost the promotion/relegation game to fall into Level II for the tournament's next iteration in 2018.

On the last day of the tournament in Bangkok, China faced Japan in the U18 FIBA Women's ABC final for the third consecutive time, and once again, to the same result. China's duo of Jiaqi Wang (29) and Yueru Li (22) continued their dominant streak in the final, helping to give China a nine-point lead at halftime, and eventually, turning the second half into a long celebration. China won the final comfortably, 78-47.

Earlier in the day, Korea squeezed past Chinese Taipei in a well-contested game 66-63 to secure the bronze medal. Chinese Taipei led the back-and-forth contest 37-35 at halftime, but Korea took a slim lead in the second half and Juyeon Lee (31) hit two late free-throws to secure the 66-63 win. Jihyun Park added 22 for Korea, while Chinese Taipe were led by Jing-Ting Wang's 24. 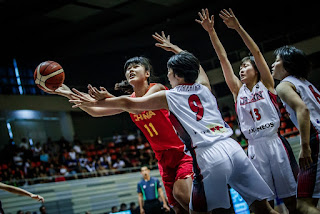 A day earlier, China had shown more flashes of their dominance on both ends with an impressive 64-35 win in the semi-final against Chinese Taipei. China took a double-digit lead in the first quarter and behind a dominant night by Yeuru Li (20 points, 17 rebounds), were in-charge of the game till the final buzzer. Japan pulled off a minor upset of sorts in the second semi-final with a blowout win over Korea, 63-41. Jisu Park's double double (18 points, 14 rebounds) was not enough to keep Japan's balanced offense from racing ahead for the win.

Once again, the big four of Asia - China, Chinese Taipei, Korea, and Japan - were the semi-finalists and the four top teams in Level I. But the tournament's higher level also featured India and the hosts Thailand. India's squad was led by former international player and veteran coach Shiba Maggon and captained by Karnataka's experienced young star Bhandavya HM. The team had finished sixth in the tournament two years ago but managed to retain their Level I status.

India's best chance of a Level I win was in their very first game, against the hosts Thailand. But a poor start against the highly-motivated hosts doomed India from the start. Thailand's impressive 26-7 second-quarter run gave them a huge, 45-20 halftime lead. India were crawling back from the deficit from that point on, but time was against their side and their comeback fell short as Thailand held on to win 67-58. Captain Bhandavya HM scored 17 for India in the loss. 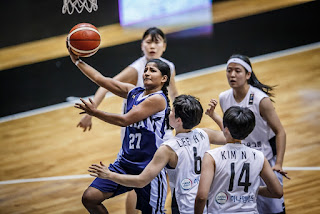 Things were not going to get any easier for India. The next day, they were pitted against the reigning and eventual champions China, and the difference in class between the two teams was clear immediately. China led India 55-23 at halftime and then improved to 59-15 in the second half, eventually ending the game with a dominant 114-38 victory. Shuangyan Tan (18) and Yueru Li (17) led China in this massive win.

Game 3 for India was against Chinese Taipei, and once again, things began inauspiciously. India were outscored by double digits in each of the first two quarters and trailed 41-13 at halftime. A slight improvement in the second half didn't help matter as India eventually fell to a 80-46 defeat. Meng-Hsin Chen led the way for Chinese Taipei with 17.

The next afternoon, India made a concentrated effort to have a good start, and they were hanging on behind Korea 13-12 at the end of the first quarter. But Korea's depth in talent eventually took over the game, as India's shooting woes continued and the team struggled mightily on the offensive end for the rest of the contest. Korea dominated proceedings to win 69-27. 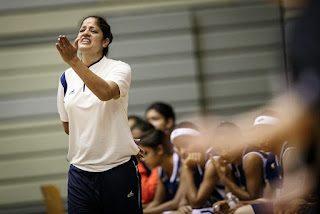 India's final Level I game was against eventual-finalists Japan. This turned out to be the team's worst offensive performance. India were held under double digits in each quarter and Japan finished with a 31-4 run to cap off a huge 93-26 victory. Kiyo Miyashita had 25 points and 10 rebounds to nearly outdo all of India's production single-handedly.

After five straight losses, India's final chance of redemption was to win their playoff game against Level II winners Indonesia and ensure their place in Level I for the next iteration of the tournament. India started well against the lower level team, leading 26-21 at halftime and holding a six point advantage before the beginning of the final quarter. But in the final quarter, it all fell apart; Indonesia dominated India on both ends of the floor to race out to a commanding 21-3 run and eventually win the game 49-38. The victory secured Indonesia's place in Level I. India's silver lining in this contest was the performance of captain Bhandavya, who chipped in her personal tournament-high 23.

It was eventually a disappointing trip for India to Thailand, as Coach Maggon's team returned winless with a 0-6 record and got relegated to Level II. India can take some heart in the performances of Bhandavya HM, who led the team with 12.7 points per game. Nishanthi Masilamani and Priyanka Prabhakara also played big minutes for the team. Hopefully, the individual players will soak up the positive lessons and experience of this tournament and improve for India at the U18 and senior side in a few years.