Started from the Bottom: David Stern makes his first trip to India


I wrote this feature for SLAM Online, and it was originally published on their website on April 17, 2013.

Streetball schedules in India change drastically in the summer. With temperatures soaring to unbearable heights, most players choose wisely to avoid playing when the sun is up at its harshest. Serious ballers wake up at dawn for an early run around 6-8 AM, and then, after a day spent at rest/school/work, they return as the sun sets for a few more hours in the cooler evenings. The brave souls who do venture out to play in the afternoons have to deal with dizzying afternoon winds (called Loo in Hindi), and cement courts so hot that they could burn shoe-soles and bare feet. Playing bare feet, of course, isn’t exactly out of the question in the poorer pockets of the cities. 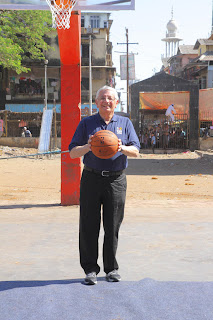 Mumbai is far from being India’s hottest city, but temperatures do begin to soar to uncomfortable highs starting from this time of the year and running into the humid pre-monsoon. And it was in one such April afternoon in the warm, humid city of Mumbai that the man who has single-handedly been most responsible for revolutionizing the game of basketball found himself on a basketball court.

This is an image of NBA Commissioner David Stern, standing alone holding a basketball in a raggedy-looking court in the heart of Mumbai. That is the Mastan YMCA court in Nagpada, a mostly-Muslim minority neighbourhood in India’s financial capital, an overcrowded bustling area of slumdogs in the city of millionaires. This iconic basketball court is where some of the nation’s finest have honed their craft and where ambitious poor street children mingle with international-level players.

Officially in India for the launch of a NBA Cares programme, Stern’s belated visit to the world’s second-largest population means a lot more than charity. Entering the last of his 30 long years as the head honcho of the NBA, Stern has a revolution of the game back home – from Magic and Larry to Jordan to James – and a rapid popularization abroad – from Barcelona ’92 to China. Now, he finds himself, for the first time in his career, in one of basketball’s last international frontiers.

By most accounts, basketball is only second to football (soccer) in its widespread popularity across the world. From the best in the game in North America to the passionate followers of the game in South America and Europe; from the far reaches of Australia and Africa, and the 1.5 billion in China, basketball has been accepted and it has thrived. But the 1.3 billion people – most of whom left completely untouched by the sport – have long stuck out like a sore thumb.

Stern, who took over as Commissioner of the NBA in 1984, visited Russia for the first time in 1988 and China in 1991. In a recent interview with DNA India, he admitted that that the NBA has been late in their entry to the Indian market. But, he added, “We were basically responding to a built-up infrastructure system. India, we were watching. This market is growing at such a rapid pace and we know we have an opportunity (to grow) here. We decided to be here. We only go to (to a country) if we are committed. We have offices in India now.” 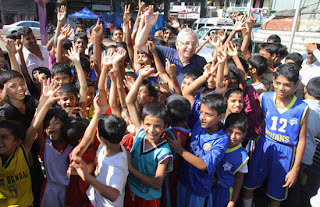 The NBA’s has had a light presence in India for half a dozen years already, but it was only a year or so ago that the finally opened their first India office, in Mumbai. In the past recent years, the NBA sent current and former players to the country as league ambassadors (Dwight Howard, Pau Gasol, Brandon Jennings, Muggsy Bogues, George Gervin etc.) and held various grassroots programmes in the major basketball-loving cities in the country. Their presence grew online through NBA’s India website and social media and on the screen, with comprehensive broadcast deals bringing more live NBA games to the Indian household.

But it seemed that India still wasn’t ready yet. In a country of a billion, India still can’t find a 12-man roster to become a basketball heavyweight. India’s national teams still finish in the lower rungs of Asian championships and are usually ranked between 40-50 in the FIBA World Rankings. India’s best players still don’t have a professional league to practice their craft in; instead, they are all semi-professionals who hold other government jobs and take part in federation or private invitational tournaments through the year. The infrastructure in India is still an issue, with few stadiums that can boast international basketball competitions and none that could satisfy the NBA’s high demands. Most players still play in outdoor courts, on cement, still wake up before the sun in the summer or suffer the wrath of the afternoon heat.

The obvious example for Indian basketball to try and imitate are our friendly/frosty neighbours up north: China. Both are big countries with massive populations and a rapidly developing economy. China has accepted basketball with open arms: the game has trickled down from a fairly competent basketball league (CBA) to grassroots adoration into becoming the first-choice sport for most young Chinese. India knows that basketball will never upend Cricket in popularity, but those invested in the sport are interested in just capturing the attentions of a small minority. A minority of a billion is still a very, very large number. China got a head-start: the game has been played there for decades and started to become a bigger deal in the 90s. India may never get to that level, but Stern’s first visit could finally be the boost that it needs in the right direction.

Stern, for his part, was more optimistic about Indian talent than most, claiming that an Indian could play in the NBA within five years. Unless we count Canadian-Indian New Mexico State’s Sim Bhullar or his younger brother Tanveer (and we won’t), this still seems like quite a far-fetched possibility. The NBA is an impossibly tough league, and India’s coaching, player development, and infrastructure still need a few more years before we can begin to hone an NBA-worthy player. The closest call is Satnam Singh Bhamara – the 7-footed teenager who was plucked out of a tiny Indian village and now finds himself developing at an impressive rate in the IMG Academy in Florida.

Stern stated that he hopes to achieve four things in India: the right scale of adoption of the sport at school level, successful TV coverage, increased presence on digital and social platforms, and run a collegiate league.

Here’s the thing: Basketball is already played in most schools in India. The challenge isn't to adopt basketball to schools, but to make it a serious option for students and not just a pastime. Most young basketball players - even the really talented ones - quit the game to focus on 'real life' as they get older. Indian kids (like other Asian kids) are pressured to focus on traditional academics over anything else. This is a bigger problem facing anyone hoping to venture into sports or arts. 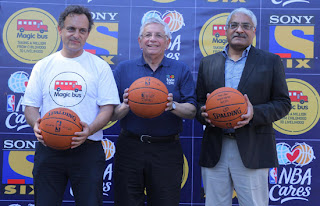 TV coverage is definitely realistic, and the NBA has increased their coverage every year. Only problem with NBA in India on TV is that most live games are at around 5-8 AM in the morning, so it's tough to create the same game-watching atmosphere. The NBA is doing a great job with digital/social outreach in India, and this will continue to grow at a rapid pace.

And in reference to Stern’s last point: more than collegiate or school leagues, the NBA in India has been involved in promoting grassroots level competitions for inner-city amateurs around the country.

What India really, desperately needs, is a national professional basketball league. The type of league that will help create consistent basketball earnings for the best players in the game in the country and will encourage young talents to not quit on their hoop dreams too early. The type of league that if marketed the right way so casual fans of the sport – who know more about Kobe Bryant and LeBron James than home-grown stars like Vishesh Bhriguvanshi  and Jagdeep Singh – can become more aware of the Indian basketball talent. The type of league that can create jobs for referees and coaches, and assistants and managers, and agents and physiotherapists, and commentators and more. The league that could potentially would be the biggest push to improve on the basketball infrastructure across the county.

India’s experiment with this type of league – Cricket’s Indian Premier League (IPL) – has already been in place for the past six years and enjoys a fanatic level of popularity. Private owners got involved and pumped in money into the IPL, and it has resulted in one of the richest leagues in the league. Other sports in India can’t expect cricket levels of success, but similar leagues in Field Hockey, football, and Badminton.

A pro basketball league can’t be too far away. The incentive will have to come from the Basketball Federation of India (BFI), the sport’s governing body in the country, and IMG Worldwide, the international conglomerate who have been the BFI’s sponsors for the past few seasons.

During his stay in Mumbai, Stern met with several current and prospective business partners for the NBA before enjoying an evening at an IPL game. Like the IPL learnt from the NBA in marketing cricket in India, Stern commented that the NBA will have to learn from the IPL to work in conjunction with the BFI and IMG to market basketball.

Things will not be as glamorous as they are in the States, or even work as smoothly as they do in China, but Stern’s visit has definitely signalled that basketball in India is headed in the right direction. And if a small fraction of the world’s second-largest population can become further enamoured by basketball, it could help make a big dent in the game’s future worldwide.

“India is totally unique,” Stern said, “We are starting from the bottom. And I must tell you we could not be more confident.”

‘The bottom’. As in the world’s largest youth population just waiting to be sold the game of basketball to become a real power. ‘The bottom’ are kids who play basketball in bare feet on hot days and kids who watch the NBA’s Commissioner promote a wonderful sport in their own backyard, near their own slums.

‘The bottom’, where money, fame, indoors, outdoors, hot and cold go out the window, and the only thing left is the player and the game.