3x3 basketball has existed for pretty much as long as real basketball has, but in recent years, this shortened, quicker format of the game is being pushed to gain more official status and respectability around the world. The world’s governing body of basketball – FIBA – is hoping that their efforts to push FIBA 3x3 will make the format an Olympic sport by 2016.

And this spirit has trickled down to India, too. So much that, for the first time in history, the Basketball Federation of India (BFI) is organizing India’s first ever 3x3 National Basketball Championship for Men & Women on April 10-11 at the Thyagraj Indoor Stadium in New Delhi. A total of 20 Men’s and 16 Women’s teams featuring India’s best senior players from various states across the country will be taking part in the competition. The tournament is being organized in conjunction with the Delhi Basketball Association (DBA).

According to BFI’s CEO Roopam Sharma, the National Tournament for this format of the game will now be held annually in India to keep up with the growth of 3x3 tournaments around the world.

If you haven’t been keeping up, here is a quick recap of the official rules of 3x3: Games will be played on the half-court. Each team can have four players – three on the court and one off the bench. Each field goal is worth one point and a three-pointer is two points. The first team to 21, or the first team leading at the end of 10 minutes, wins. The shot-clock is just 12 seconds long. If scores are tied after 10 minutes there will be overtime, and the first team with a two point lead wins. 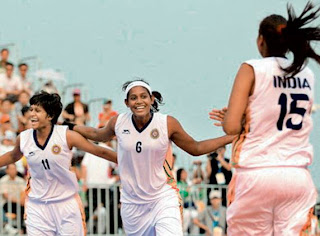 The BFI has announced that 40 matches a day will be played at the Thyagraj Stadium in Delhi – on multiple half-courts simultaneously – over the next two days. So if you’re in Delhi, head there now to watch the action!

In preparation for this first-time event, several states across the country have already held state-level 3x3 tournaments to pick their representing teams, including Kerala and Delhi.

The shortened version of the game means that it is nearly impossible to predict which team will shine and go on to lift the first ever trophy. Teams which have dominated India’s 5x5 national tournaments, like Punjab, Uttarakhand, or Indian Railways, Services, Tamil Nadu (Men) or Indian Railways, Tamil Nadu, Chhattisgarh, Delhi, or Kerala (Women) will as usual boast the strongest squads. But a competition like this leaves room for surprises and upsets, and that is essentially the essence of the fun of 3-on-3 half-court play. 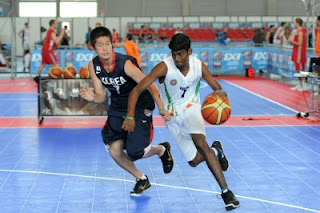 India has had some success in 3x3 Basketball in recent years, and relatively, more than they’ve had in the ‘full’ version of the game. India’s Women’s team memorably won the gold medal at the 3x3 Beach Games in China last year. India’s Men and Women both won the gold at the South Asian Beach Games in Sri Lanka in 2011.

This tournament will serve as a platform to pick India’s national 3x3 team for future FIBA competitions. Four top Men and four Women players will be picked to represent India in the First FIBA Asia 3x3 Basketball Championship in Doha (Qatar) for Men from May 15-17 this year and for Women later in June.

BFI CEO Sharma said, “Our endeavour is to maximize the potential of basketball promotion and development in India. These two events are crucial in the growth and popularity of the sport."

A week after the conclusion of the Delhi 3x3 Nationals, the basketball circus will move to Ludhiana (Punjab), where the BFI will be organizing the first ever U18 3x3 National Basketball Championship for Men and Women. That competition will also be held in similar to these nationals and the best performing players will be picked to play for the U18 FIBA Asia 3x3 Basketball Championships in Bangkok (Thailand) from May 22-24, 2013.

Bringing national-level 3x3 Basketball to India, played under official rules and terms, is another major step ahead for Indian basketball. My only hope is that it doesn't overshadow the importance of the more respected and challenging real 5x5 version of the game. In India, 3x3 can introduce a whole new audience to participate in or attend basketball games. It can help in further popularizing the sport in the country and guide our national teams to more success in international competitions.