The Basketball Federation of India (BFI) announced today that they will be accepting applications from candidates around the country hoping to join the National Coaching programme, both for Men and Women. While the BFI hasn't clarified what positions the candidates will be applying for, there could be numerous opportunities available for coaching in the various age levels (U18, U16 etc.) for both Men and Women, and as Assistant or perhaps even as Head Coaches.

Of course, it won't be all that easy. Applicants who will be considered for the jobs will be chosen only if they pass the following qualifications (via BFI website). The applicant must:

It is a tough set of qualifiers, and I'm assuming that the BFI chose its national coaches in the past on similar terms. Still, it is nice to see that they are clarifying their selection process and making it known openly to any coach who has the ability and/or the qualifications. In addition, the qualifications above can also serve as a good benchmark for young coaches to aim at who dream of being part of India's National Basketball system. 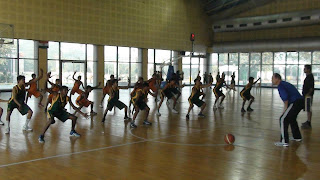 Coaches can submit their applications to the BFI through email, fax, post, or by hand (check the BFI website for their contact information) latest by April 8, 2013. The BFI recommends that applicants get their applications recommended by their State Secretaries before submission. Remember also to include additional qualifications, training courses, International/National participation and medals winning certificates, papers written, and any other significant achievements to the application.

In September last year, the BFI named American Scott Flemming - former NBDL Coach - as the Head Coach of India's Senior National Men's side. New coaches could get a chance to work besides him. This is a particularly important year for India's National teams, as a large number of international basketball tournaments will be held in the coming months. The biggest tournament will be the 2013 FIBA Asia Championship, slated to be held in Lebanon in August. The FIBA Asia Championship for Women will also be held this year, as will the FIBA Asia Championships for Youth (U16) Boys and Girls in separate events. In addition, the 2nd Asian Youth Games are set to be held in Nanjing (China) and India may have an opportunity to take part in the basketball competition at the event. For all the international tournaments, it is likely that India will be in qualifying tournaments against South Asian rivals back on home soil.
Posted by KARAN MADHOK at 13:58