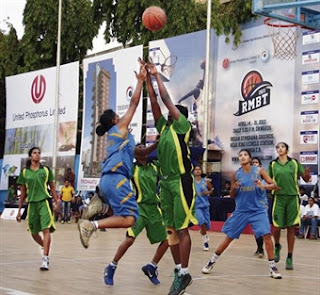 The RMBT is one of the most prestigious basketball tournaments in the country. This was the 28th edition of the tournament, featuring participation from 11 teams from all across India in the Men’s and Women’s division and a further eight teams in the Youth (U21) tournament from Maharashtra.

In a hotly-contested Men’s final, ONGC (Uttarakhand) were made to sweat against IOB (Chennai), as the game went all the way down to the wire. While ONGC enjoyed a nine point lead at halftime, IOB stormed back in the third quarter and remained neck to neck with ONGC in the fourth till the final buzzer. Behind dominating performances by India internationals Yadwinder Singh (18 points) and Vishesh Bhriguvanshi (17), ONGC were able to maintain their lead and win the game 59-54. Pratham Singh (21) and Rikin Pethani (18 points, 10 rebounds) were the leading scorers for IOB.

The Women’s final, which pitted two of India’s finest sides in Southern Railway and Chhattisgarh against each other, turned out into a blowout in Railway’s favour. Southern Railway, who had been defeated by Chhattisgarh by one point in a thrilling group game earlier in the week, took revenge by jumping into an early 15-4 lead in the first quarter of the Final en route to an impressive 64-39 victory which retained them the RMBT title. Railways’ Anitha Pauldurai – who struggled with her shot all game – nevertheless ended up with 17 points and 9 rebounds to lead the way for her squad. R Rajpriya had 20 points and 6 rebounds.
Railways played without the presence of their legendary Center Geethu Anna Jose.

The Final of the Maharashtra Youth Boys Tournament was also held on Sunday and won by Savio Club, who used their considerable height advantage to slip dominate Mastan YMCA 86-54.

Vishesh Bhriguvanshi of ONGC won the Best Player trophy at the tournament.

Earlier on Saturday, ONGC defeated Indian Air Force 72-52 in the first Men’s Semi-Final led by Bhriguvanshi's efficient 27 points and lock-down defence on the other end. IOB played in a thrilling second final against Punjab which they won 79-75.

A ‘Skills Challenge’ – akin to the similar competition held at the NBA’s All Star Weekend – was also held on Saturday. Southern Railway’s Kokila (Women) and RCF’s Kapurthala’s Nikhil Chopra (Men) emerged as winners.

This year’s RMBT took a step further than any other basketball competition in India in terms of embracing technology in promoting their games across the country, and potentially, across the world. Although Ramu Memorial has always been an attractive destination for local fans to attend and watch India’s finest players in action, this year, the action was brought closer to home than ever for those following the championship from long-distance. Through effective use of Facebook, Twitter, and the RMBT website, fans were able to get instant updates and recaps of the action. The games were shown on DD Sports as usual, but this year, the tournament was even live-streamed on RMBT’s YouTube page.