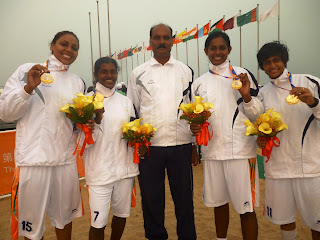 It was a dream finish for India’s 3x3 Women’s basketball team who won a gold medal after defeating China in the Final 17-14 at the 3rd Asian Beach Games in Haiyang, China. It was an undefeated run by Indian eves who won all five of their games including a thrilling comeback victory over the hosts. Geethu Anna Jose and Anitha Paul Durai scored the crucial last points to give India the final victory.