Poonam Chaturvedi: The next next big thing

Off the court, she quietly tries to hide behind her teammates. But while silence may deny us from hearing her, she can’t stay visibly hidden for too long. A month shy of her 16th birthday, Poonam Chaturvedi is already 6 foot 6 inches tall, at least half a foot bigger than any of the other girls in her Chhattisgarh Youth team. Any attempt to hide is futile.

Poonam Chaturvedi grew so tall, so quickly, that she has already forgotten tall she exactly was just three years ago. 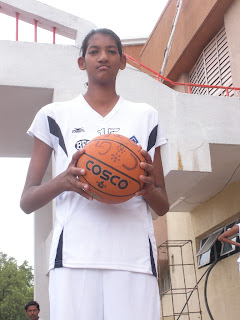 “How much did you grow?” I ask, trying to get her to be a bit more specific.

It isn’t easy for a 6 foot 6 inch human being to hide, but everything from Poonam’s own shy demeanour to the years she played ball silently away from the public eye indicate that somehow, this giant teenager remained a secret. Women’s basketball in India is mostly a small girl’s game, and so anyone with the perfect advantage of height and skills literally rises head and shoulders above all to dominate. See the case of Geethu Anna Jose, India’s best known basketball player, who at 6 foot 2 has been the best player in the Women’s game for half a decade and became the first Indian to be invited for a WNBA trial.

Still at the U16 level, Poonam has already become the tallest female basketball player in India. The height came by nature, but it is the work she is putting into her game now that will help her grow into the best basketball player that she can be.

Born and bred in Kanpur (UP), Poonam now finds herself as the centerpiece of the U-16 girls side representing the Chhattisgarh state at the Youth National Basketball Championship in Nagpur. After a false start to her basketball career at the hostel in Agra, she was spotted at the National Women’s Games in Chhattisgarh by Chhattisgarh Basketball Association’s secretary Rajesh Patel. A man with a shrewd eye for scouting and grooming successful women’s basketball players, Patel, who is also the coach of Chhattisgarh’s women teams, realised that the young giant Poonam would have to become his next project.

“We saw her playing for UP at the Women’s Games and we wanted to speak to her,” Patel says, “Over the next four months, I must have called her father 30 to 40 times to try and convince him to send her to join our basketball camp in Billai (Chhattisgarh).” 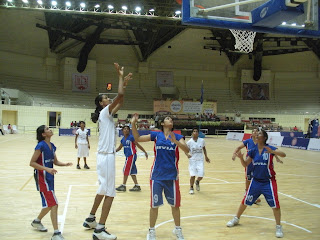 Patel’s camp and hostel in Billai has gained the reputation of becoming Indian Basketball’s talent factory – it took until the end of April before Poonam finally joined the other talented young girls at the hostel, and the opportunity couldn’t have come a moment too soon.

“Back in Agra, her game wasn’t developing at all,” said Patel, “There were only six or seven girls in the hostel there, so the only practice they got was shoot-around, there were never enough to play a full five-on-five game. When we recruited her to Chhattisgarh, we barely had a month to make sure she fit in with the system. She had to be ready to play for our U16 team at the Youth Nationals.”

Her big unveiling, and her first competitive game for Chhattisgarh, was against Uttarakhand on the first day of the Youth Nationals. Still showing a lack of coordination in fitting in with the run-n-gun Chhattisgarh side, Poonam nevertheless managed to score 14 points in a dominating blowout win for her side.

Patel’s Chhattisgarh sides have always suffered from height, but never have they let that come between them and success. In producing one of the most-triumphant programmes ever in several different age levels over the last decade, Patel has preached a style of ball-hawking defense and quick fast-break baskets to make sure that his teams almost always win.

Now, both Patel and his latest recruit are in new territory: the coach because he has to change his offensive and defensive schemes around a taller but slower player, and Poonam because she was playing with a quick team which already carried with it a winning culture. It was no surprise then that she was a step too slow in her early competitions with Chhattisgarh, but both player and coach realise that there is a long road to improvement.

“My game has improved a lot since I came to Chhattisgarh,” she says, “But I want to keep playing harder and keep improving. This is a good defensive team and I realise that my defense will need work to fit in: I still need to learn how to always stay in front of the player I’m guarding.” 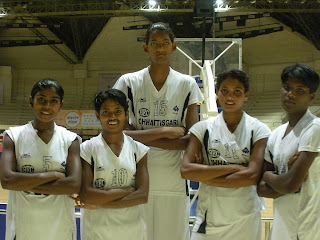 Patel is even more critical of his young and potential-ridden player. “We have changed our defensive patterns for her, and she will have to fit in. But there are a lot more areas where we have been working hard on, giving her hours of extra, individual training: her jumping/athletic ability, her back to the basket game, free throws, showing, dribbling, and of course, we want her to gain more weight and bring a lot more power to her game.”

Yet, regardless of the holes in Poonam’s game, it isn’t difficult to see why this 6 foot 6 teenager is garnering all the hype at the competition. She already has a naturally good shooting stroke, a good offensive post game, and in just her first month of proper basketball training, she has become good enough to be a real threat for opponents at the Youth Nationals.

“She makes our team a lot better too,” Patel adds, “We now feel a psychological edge of having the tallest player whenever we go against any opponent. With her on this side, I know this team can qualify for the final.

But both Poonam and Patel are looking way beyond the Youth Nationals: Patel’s next aim is to make sure that Poonam is chosen for Indian National U16 Select Camp after this tournament. He is also hopeful that, with the arrival of a world class strength trainer Zak Penwell, Poonam will have just the kind of guidance she needs to bulk up into perfect shape.

“Her future is very bright,” says Patel, “She’s still young, and is already the tallest player in India: she can go a long way.”

And while her coach gives the outspoken support, and while the comparisons of ‘next Geethu’ pour in, Poonam remains confident in her own quiet and calm way. “I want to play for India,” she says.

No matter how hard she tries, a big girl with potentially bigger talent like Poonam can’t remain hidden behind anyone. Kanpur and Agra saw her grow, Chhattisgarh helped her develop, and Nagpur will see the early fruits of the combination of skill and size. And it won’t be long before all of India Basketball knows about the next next big thing.
Posted by KARAN MADHOK at 13:17