I've said it before and I'll say it again - if there is one thing my fellow Hindustanis are good at, its software. And when the techie also happens to be a fellow Hoopistani (aka, Hindustani Hoopster), then the result will be Vasu Kulkarni.

Kulkarni is the young entrepreneur and the CEO of New York based tech company Krossover Intelligence. In (relatively) non-geek terms, this is what their most well-known product, the Krossover Sports Intelligence Platform does: It is an on-demand video analysis tool that provides basketball coaches with indexed tags on every possession of the game. The video of a basketball game is broken down into these short clips and statistics can be generated based on the tags. The tags identify hundreds of events in the game, such as shots, steals, and fouls. These tags can then be accessed from the Krossover website by the coaches and sorted into a database. Coaches can go in-depth to see each aspect of the game, saving time on sorting out minute details of the game tape themselves, and can even create customised highlight reels. The software is also useful for players and for fans/media, who can check out personalised statistics, film, and highlights.

It's a great piece of software making life easy for several coaches in the US right now. From an article on Kulkarni/Krossover from Fast Company:

Krossover, which went live in late 2010, is making inexpensive analytics tools available over the web for basketball and lacrosse coaches at small colleges and high schools.

And all of it is the brainchild of an unlikely basketball polymath raised in Bangalore, India, playing on a dirt court outfitted with homemade backboards and rims.
Vasu Kulkarni, now 25, had been a star on his high-school basketball team in India -- at 5-foot-10 and 135 pounds. When Kulkarni moved to the United States to attend the University of Pennsylvania, he thought he was good enough to try out for the basketball team. He got crushed by far bigger and better-coached players. "I didn't know there was such a huge discrepancy between where I came from and here," Kulkarni told me as he downed breakfast at the Reebok Sports Club in New York. Kulkarni, though, worked out and bulked up until, in his senior year, he walked on and made the Penn junior varsity.
While on the Penn team -- often on the bench -- Kulkarni got a view of the scorekeeper who used pen and paper to mark down everything that happened in a game. The notes would later get tallied by hand into statistics. 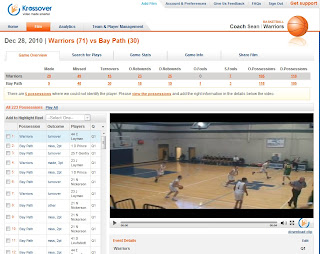 By the time Kulkarni graduated, he was convinced that technology could make better use of such stats. He built a service that allows coaches and players to locate specific shots in game video with the click of a button. A friend invested $50,000, and Kulkarni's deceptively simple idea became a startup.

"The big picture for us is content," Kulkarni says. "These are lifelong memories of playing high-school and college basketball, with stats."

As of April, Krossover had about 65 basketball teams as customers; he's hoping to sign up 500 by year's end. The company recently launched a similar product for lacrosse, and Kulkarni says it's building versions for volleyball and football.

Kulkarni, who on his website mentions that he is athlete and then an entrepreneur, has done well to take his love for the game of basketball to the next level. was a part of the JV Basketball Team at the University of Pennsylvania where he also earned a BS in Computer and Telecommunications Engineering, and Entrepreneurship. He was also amongst the 2010 Finalists of the Bloomberg Businessweek's America's Best Young Entrepreneurs.

The Krossover platform has already been used to index over 200,000 possessions in basketball and other sports, like Lacrosse, Volleyball, American Football, and Ice Hockey.

Interested? What are you waiting for? Watch a product demo here.
Posted by KARAN MADHOK at 12:09