NBA's rising star Brandon Jennings of the Milwaukee Bucks will travel to India from May 13-18 to conduct a series of events to grow the game of basketball in Mumbai and Pune. He will become the 16th NBA or WNBA player or legend to travel to India in the last three years, as part of the league’s continued commitment to grow the game. 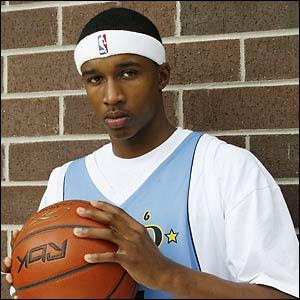 Jennings will attend the Jr. NBA/Jr. WNBA National Skills Challenge Finals on May 15 in Mumbai. The event is the culmination of the largest school-based initiative ever conducted by the NBA in India. Since March, the NBA and HP have taught basketball and life skills to youth in 500 schools in Bangalore, Chennai, Delhi, Mumbai, and Pune. Additionally, 500 coaches attended two-day clinics in each city where they learned coaching techniques and received a “Basketball in a Box” coaching kit, which will provide them with a resource to grow basketball in their community. HP Dream Screens were used at all coaching clinics to provide video demonstrations to help illustrate certain coaching techniques.

The first thing that comes to the mind of most fans with Jennings is the legendary 55 point game as a rookie on November 14, 2009 against the Golden State Warriors. Jennings became the youngest NBA player ever to score 55 as he did it in only his seventh NBA game. Jennings averaged 16.2 ppg for the Bucks as a sophomore last season.

Before his NBA career began though, Jennings was already a legend - he was one of the best players to come out of high school and spent one season (2008-09) playing in Europe, with Lottomatica Virtus Roma in Italy. He was selected with the 10th overall pick in the 2009 NBA Draft by the Milwaukee Bucks. He guided his team to the NBA Playoffs in his rookie season and became the first player to win Eastern Conference Rookie of the Month four times.

“Having played in Italy, I have seen first-hand how the sport is growing globally and I am excited to visit India with the NBA to help continue the growth of the game,” said Jennings. “The NBA has the best basketball players from around the world and it is amazing to think that one of the kids I teach in India could one day play against me in the NBA.”

Fifty youth from across India have advanced to the National Skills Challenge Finals by qualifying at City Championships. Jennings will crown the boys and girls National Champions, and conduct a basketball clinic for participants. HP and the NBA will provide the champions with an HP laptop and a trip to New York City to train with an NBA coach and visit NBA headquarters.

On May 16, NBA Cares will partner with Magic Bus, a not-for-profit organization in India to conduct a basketball clinic in Mumbai. Magic Bus works towards creating equal opportunities for children and youth from vulnerable communities. Over the past 12 years, Magic Bus has used its unique “sport for development” approach to empower children and youth to make positive life choices in areas of gender, education, livelihood and health. Jennings will work with youth from two communities, using basketball to illustrate the importance of living a healthy, active lifestyle.

Jennings will then travel to Pune where he will become the first NBA player to host an event in the city. He will conduct a clinic for children and coaches who participated in the Jr. NBA/Jr. WNBA program on May 17 and will host an NBA Cares basketball clinic for disadvantaged youth on May 18.

So this is Jennings' schedule in India - catch him if you can!