In a few days, one of the most talented Indian basketball players - Amjyot Singh Gill - will wait for the biggest step in his life at the NBA's D-League draft. But before he heads to the US, Amjyot is making a stopover in the UAE for another basketball extravanganza to add to the growing feathers in his cap. 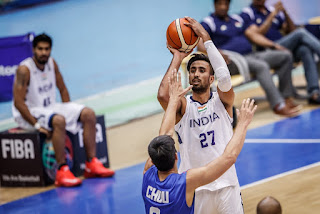 Amjyot Singh is the marquee name in Team Hamamatsu, the champions from Tokyo who are one of the 12 finalists at the FIBA 3x3 World Tour Finals in Abu Dhabi (UAE), set to be held on October 27-28. Hamamatsu are a team rich with Indian-origin talent, and are even unofficially 'Team Gill' at the tournament, also featuring Inderbir Singh Gill (USA), Bikramjit Gill (Canada), along with Japan's Chihiro Ikeda. The three Indian-origin players completed training at the world-class Jaypee Greens facility in Greater Noida and flew out to Abu Dhabi on Wednesday, October 26.

The FIBA 3×3 World Tour Finals is a very prestigious event that is the equivalent of a World Cup for 3×3 basketball for professional players.

"Playing 5 on 5 (in Japan) was a very good experience as it was my first professional league," said Amjyot, "Playing in 3 on 3 was a whole new game for me but because of Inderbir and Bikram bhai they modified my game and helped me a lot to do what I’m doing now. We are prepared for the World Tour and we think we will do good. We are hopeful of reaching at least the semis and after that whichever team sets up its plays better will win."

Chandigarh's Amjyot (24), a six-foot-nine forward, has signed a contract with the NBA D-League and he will now be eligible for the D-League's draft on October 30th. OVer the last few years, Amjyot has truly made a mark on basketball in India and further around the Asian continent. With his performances for the national team, he has emerged as the best All-Round talent and one of the top superstars of the Indian national team. Abroad, he has excelled for the Tokyo Excellence in the Japanese D-League and made waves in the FIBA 3x3 tour in Tokyo. Most recently, he helped India to their best international basketball performance in 27 years with a 7th place finish at the FIBA Asia Challenge in Iran. In an interview a few weeks ago, Amjyot told me that he aims to be "the first Indian to play in the NBA."
Posted by KARAN MADHOK at 20:31