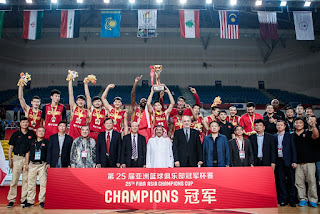 India were represented at this tournament by Dehradun's ONGC, who, despite featuring some top Indian talent, were ousted from the Preliminary Round stage without a win and finished tied for 9/10th place in the ten-team fray.

Kashgar's squad were led by naturalized Philippines player and former NBA player Andray Blatche. Blatche was the star man in the final, scoring 22 points with 8 rebounds for China, while his teammates Darius Adams and Abudushalamu Abudurexiti added 19 each in the victory. China led most of the way, and survived a furious comeback by Al Riyadi in the final quarter to notch the 96-88 win. Fadi El Khatib (23) and Dewarick Spencer (19) were the leading scorers for the Lebanese squad.

Spencer was named the Most Valuable Player (MVP) of the tournament. 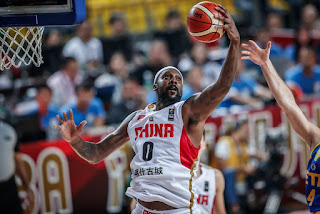 Also on the final day, Iran's Petrochimi confirmed a third-place finish for the bronze medal by defeating the UAE's high-risers Al Ahli, 100-74. Al Ahli's Samuel Young was a one-man wrecking machine, notching 43 points and 10 rebounds, but he got little help from his teammates. Petrochimi relied on a more balanced offense, backing up on the efforts of James White (22 points, 19 rebounds), Behnam Yackchali (22), and Gerald Robinson Jr. (21) for their blowout victory.

A day earlier, China survived a mammoth clash against Petrochimi 90-86 in the semi-finals to secure their spot in the finale. The game featured numerous twists and turns, and China had to bounce back from an eight-point halftime deficit to take the advantage at the end of the tense game. Blatche was again the hero, leading with 26 points and 10 rebounds, while Darius Adams added 20. Petrochimi were held at bay despite 26 point efforts by both Behnam Yackchali and James White. In the second semi-final, Al Riyadi had no problem blowing past Al Ahli, 107-79. Dewarick Spencer scored 26 for the winning side, while Fadi El Khatib (20) and Alade Aminu chipped in crucial points, too. Al Ahli's lone warrior was Samuel Young, who had 32 points and 10 rebounds in the loss.

The FIBA Asia CC tipped off on October 8th with ten teams, and India's ONGC - who had qualified for the tournament with their Federation Cup victory - were placed in Preliminary Round Group A with four touch matchups. They were led by head coach Dinesh Kumar and India international talents like Amrit Pal Singh, Vishesh Bhriguvanshi, and Yadwinder Singh. 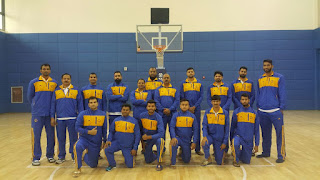 From the opener against Iran's Petrochimi onwards, it became clear that ONGC were going to be fighting an uphill battle in this tournament. Petrochimi used a balanced effort to take an early double-digit lead over ONGC and played hawking defense to cruise to an easy 95-51 win.

ONGC's second match was more of the same, this time against Iraq's Al Rayyan. Another poor offensive effort had ONGC playing catchup from the get go. Preston Knowles of Al Rayyan turned out to be sublime in this game, putting up 39 points and 14 rebounds in the 95-53 win. Al Rayyan's captain Mohamed Mohamed added 17 in the win. The lone bright spark for ONGC was India's star guard Vishesh Bhriguvanshi, who notched 20 points and 8 rebounds in the loss.

Another tough loss followed the next day for ONGC, this time against eventual finalists Al Riyadi of Lebanon. For ONGC, the duo of Amrit Pal Singh (21 points, 11 rebounds) and Vishesh Bhriguvanshi (18 points, 11 rebounds) played their best, but they got little help from the rest of the squad. Al Riyadi were led by Wael Arakji (21), Karim Zeinoun (20), and Dewarick Spencer (17) in the 91-65 win. 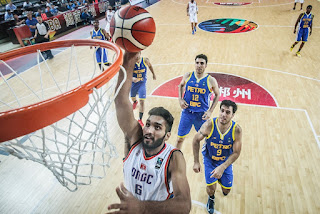 ONGC's campaign got an early end with a fourth-straight loss in their final Preliminary Round game to Chinese Taipei's Pauian. ONGC played their best game of the tournament for about three quarters, staying within sight of the Taiwanese competition as they trailed 73-62. But it was all Pauian in the final period, who blew open the gates to cruise eventually to a 101-71 win. Chin-Pang Lin scored 19 for Pauian, overcoming strong performances by Amrit Pal Singh (19 points, 13 rebounds) and Riyazuddin (18 points) of ONGC.

ONGC finished 0-4 in the tournament. Amrit Pal Singh ended with averages of 17 points and 9.2 rebounds per game, leading ONGC in both categories. Vishesh Bhriguvanshi chipped in with 16.5 ppg in the course of the tournament, too.

This was obviously not the improvement that ONGC were looking for, as basketball club representatives of India, after a similar finish at the last FIBA Asia CC back in 2013. ONGC simply did not have the depth and firepower to match the loaded squads that they faced, many of whom featured naturalized foreign players and other foreign recruits to add to their strenghts. The club tournaments will remain a weak point for Indian basketball internationally until India can begin their own proper basketball league and bring together more talents to play for Indian clubs.
Posted by KARAN MADHOK at 22:36